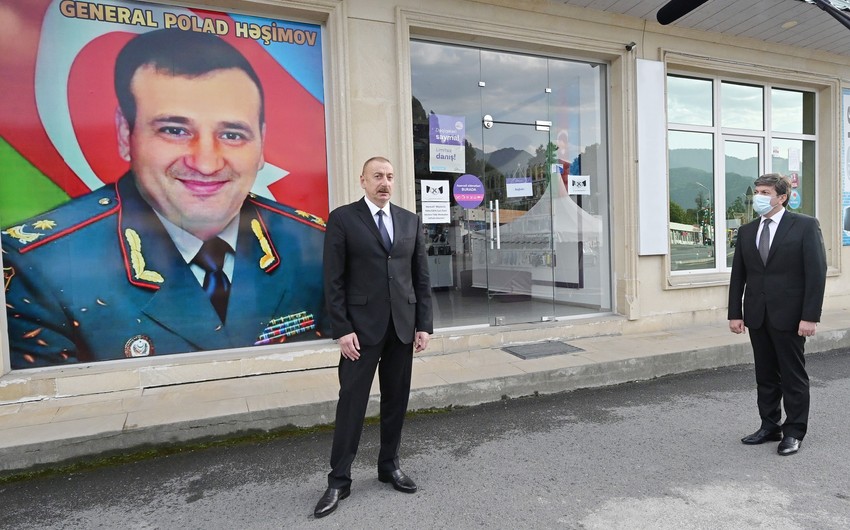 During his visit to the Gabala region, President Ilham Aliyev gave his instructions about naming a street in Gabala after general Polad Hashimov and other relevant measures to eternalize his memory, Report informs.

The head of the state talked about the heroism of general Polad Hashimov, born in Vandam village.

Notably, general Polad Hashimov served near Murovdağ and in the Dashkasan District, in the Azerbaijani and Armenian armed forces' contact areas. Polad Hashimov participated in armed clashes in Nagorno-Karabakh in April 2016 and was wounded. He participated in the capture of one of the heights near the village of Talış, which was named in his honor, "Polad's Post". For special merits in protecting the Republic of Azerbaijan's territorial integrity and the difference in fulfilling the tasks assigned to the Armed Forces, Polad Hashimov was awarded the Order for Service to the Fatherland, II degree, on April 19, 2016.

On June 24, 2019, by order of the President of Azerbaijan, Polad Hashimov was awarded the rank of Major General. Major General Hashimov, in his position as chief of staff of the North military unit, was martyred on July 14, 2020, during the fighting on the Armenian-Azerbaijani border in the Tovuz direction.