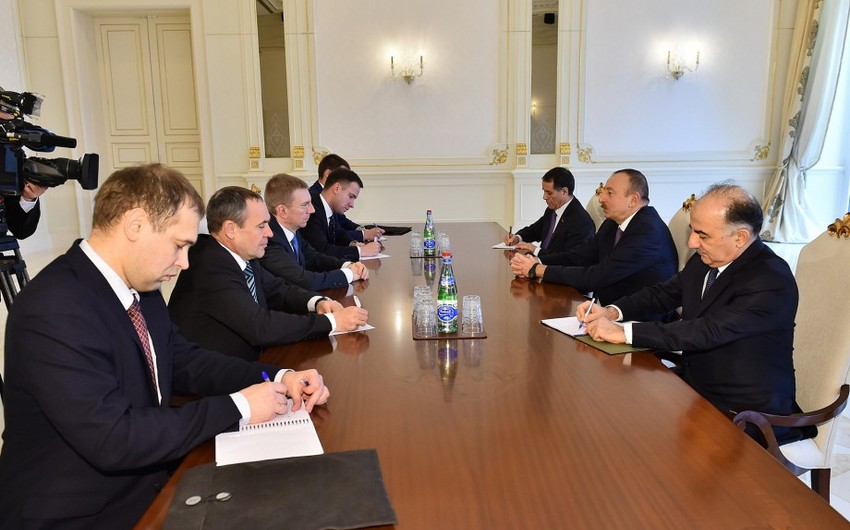 Report informs, the head of state noted that relations between the two countries had good history, describing them as strong. President Ilham Aliyev stressed the importance of mutual exchange of views against a background of changing situation in the world and in the region. The head of state noted the significance of conducting regular consultations and exchange of views and strengthening cooperation between the two countries in all areas. Hailing political ties between Azerbaijan and Latvia, President Ilham Aliyev noted that the two countries face important tasks in the field of economy. The head of state underlined the importance of increasing bilateral trade and mutual investment and expanding cooperation through attracting business circles. President Ilham Aliyev expressed hope that this and other issues will be discussed during Latvian Foreign Minister Edgars Rinkevics`s visit to Azerbaijan.

Foreign Minister Edgars Rinkevics conveyed sincere greetings of President of the Republic of Latvia Raimonds Vejonis to the head of state. Praising political relations between Azerbaijan and Latvia, Edgars Rinkevics said: “President Raimonds Vejonis hopes that he will visit Azerbaijan soon, and discuss with you the issues relating to the development of relations between our countries in all areas.” Recalling his previous visits to Azerbaijan, the Latvian Foreign Minister stressed the significance of reciprocal visits in terms of strengthening the bilateral ties.

They exchanged views over the development of Azerbaijan-Latvia relations in economic, transport, agricultural, tourism, cultural and other fields.

The head of state thanked for the greetings of President of the Republic of Latvia Raimonds Vejonis, and asked Edgars Rinkevics to extend his greetings to the President of Latvia.