Zakir Hasanov: "Azerbaijan and NATO have 25-year enduring partnership" The celebration of the 25th anniversary of our partnership with NATO is the incarnation of our achievements. This success is the result of the complex activities, which Azerbaijan had taken in very difficult circumstances 25 years ago, Report informs citing the press service of the Ministry of Defense of the Republic of Azerbaijan. 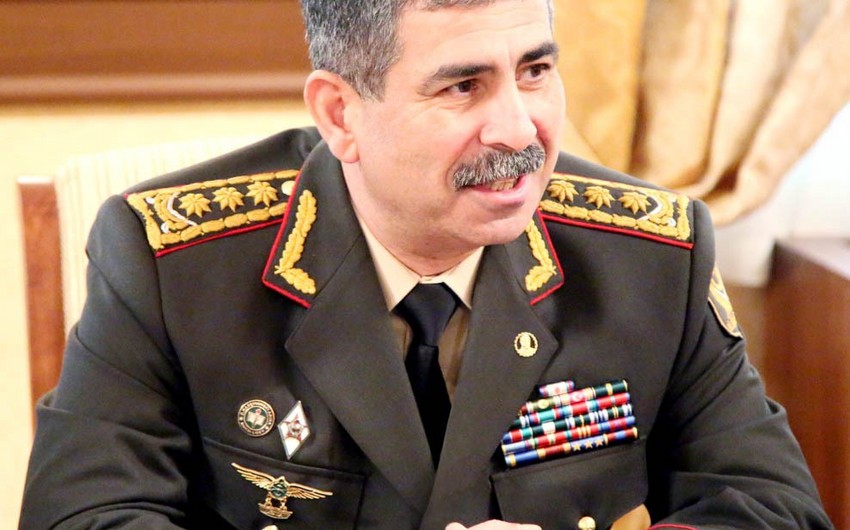 The celebration of the 25th anniversary of our partnership with NATO is the incarnation of our achievements. This success is the result of the complex activities, which Azerbaijan had taken in very difficult circumstances 25 years ago, Report informs citing the press service of the of the Republic of Azerbaijan.

Azerbaijan joined the Partnership for Peace (PfP) Programme on 4th May 1994, when the national leader of Azerbaijan Heydar Aliyev signed the PfP Framework Document, and this program, which has been successfully continued by the President of Azerbaijan and Supreme Commander-in-Chief of the Armed Forces , has proved to be one of the most successful engagements in terms of developing effective military relationship and interoperability between NATO and Azerbaijan Armed Forces.

Developing mutually beneficial relationships with NATO constitutes one of the main directions of Azerbaijan Army’s military cooperation. The existing partnership between Azerbaijan and NATO as well as joint activities in various peace support operations are vivid examples of the efforts and the peaceful intent of our country to promote security and stability in the Euro-Atlantic area.

Despite facing challenges, Azerbaijan has contributed to the attainment of international stability by joining NATO-led operations in Kosovo and Afghanistan since the commencement of the missions.

Realizing the importance of the Resolute Support Mission to the security and continuous development of the Islamic Republic of Afghanistan, as well as to the regional and global security, in 2018, we increased the number of our military contingent in Afghanistan by 30%. Additionally, Azerbaijan’s contribution to Afghanistan also includes non-military aid such as political, financial and logistic support, land-air transit, various training, and mine clearance.

We clearly understand that in a globalizing world, every crisis or conflict has unavoidable impact on other countries and therefore, Azerbaijan is and will be cooperating with NATO in order to further peace and security in the Euro-Atlantic area.

It is no coincidence that Azerbaijan is one of the first countries to join the Planning and Review Process. This mechanism, which forms the basis of practical cooperation, has been contributing to the implementation of defence reforms, which are based on the principles of modern armed forces development, to attainment of necessary level of operational interoperability, and to transformation of the Armed Forces.

Especially, I would like to emphasize that Azerbaijan Army effectively utilizes Operational Capability Concept Evaluation and Feedback Programme in order to achieve operational interoperability. Azerbaijan Army joined the program with one company in 2004, today the units from all services are involved into the program and the gained experience is shared not only within the country, but also with partner nations, thus contributing to the development of the program.

Of course, to achieve success in military sphere is directly interrelated with the level of operational interoperability. However, it is an undeniable fact that the human interoperability and like-mindedness is a key to achieving a sustainable partnership. In this context, I would like to emphasize the importance of Partnership for Peace Staff Post Concept.

24 officers of Azerbaijani Army have served at various NATO Headquarters and bodies within the framework of this program since 2002. Currently, eight Azerbaijani officers are working at various NATO Command structures. The experience, gained by working within the NATO HQs and in an international capacity during all these years, is valuable upon return of our officers to national duties. Knowledge and experience obtained in a multinational environment are seamlessly integrated into national practice to further contribute to the development of defence capabilities of our Army.

Our substantial cooperation with the Alliance also includes integration of NATO education and training standards into our professional military education system. For more than ten years, Azerbaijan has been using the NATO Defence Education Enhancement Programme to prepare leaders, ready to address new challenges and all kinds of threats in a complex and dynamic strategic environment.

NATO’s various cooperation programs have proved themselves as an effective tool for positive changes. We think that the overall stability and security of the Euro-Atlantic area depend on the domestic reforms and international cooperation pursued by the regional countries. NATO's partnership mechanisms and co-operation programs, which we are heavily involved in, play an important role in defining the framework of defence and security reforms of Azerbaijan and the entire region, and enhance security of the region, as well as the Euro-Atlantic area.
It is worth emphasizing that the historical success of the Alliance in preserving integrity, sovereignty and political independence of its members is one of the key factors that gathered so many countries around NATO in diverse partnerships, including the PfP countries. Not only does the Alliance uphold these principles, but also defends them politically in general as the basis of the Euro-Atlantic security. In this context, NATO member states’ firm position on the settlement of conflicts in the South Caucasus is commendable and Azerbaijan is grateful to NATO for supporting its territorial integrity.

Located between Europe and Asia, the South Caucasus, especially Azerbaijan, play a significant role in the global energy market. The South Caucasus is a very important region for Europe in terms of energy security. The existence of unresolved conflicts in the region creates a big threat not only to energy security, but also to stability of Europe. In this perspective, resolution of the conflicts in accordance with the principles and norms of international law, as well as the UN Charter, is in the interest of the international community.

Our country always demonstrates its commitment to peace and supports regional as well as global stability by pursuing respective policies. 25 years of multidimensional cooperation, contribution to the international peace via peace support operations, and implemented successful projects in order to attain peace in the Euro-Atlantic area are the manifestation of our successful cooperation. I strongly believe that, the success that we have attained so far is the herald of the achievements yet to come.

I am confident that we will continue to develop and strengthen this strategic partnership.