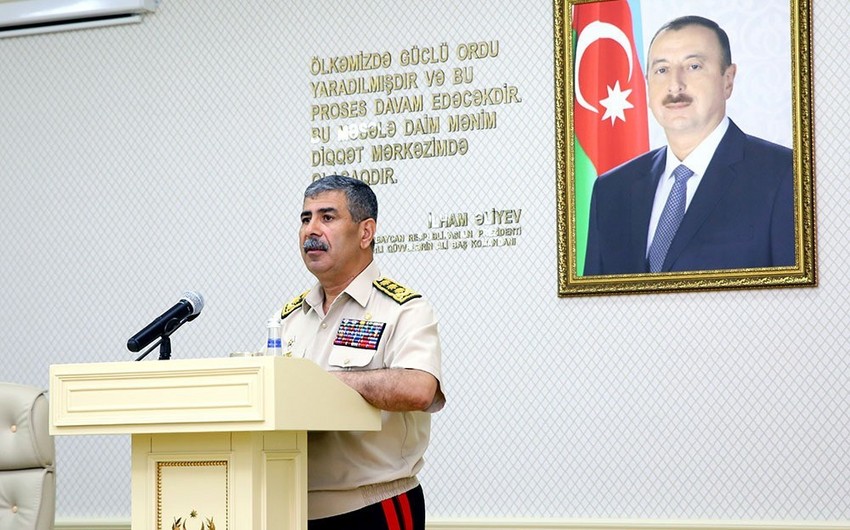 Baku. 2 January. REPORT.AZ/ "Azerbaijani Army welcomed 100th anniversary of its formation at high level. Our army successfully operated against the enemy in April 2016 and June 2018 ".

He noted that the President of the Republic of Azerbaijan, Supreme Commander-in-Chief Ilham Aliyev highly appreciates the activity of the army. "The President noted in his speeches that these operations show the strength of the army and historic victory."

Hasanov reminded the message given the whole world by the Commander-in-Chief Ilham Aliyev during the parade dedicated to the 100th anniversary of the Azerbaijani Army,: "The whole world saw the military capabilities and strength of Azerbaijan. President Ilham Aliyev has informed the enemy that material-technical base of the Azerbaijani Army is at a high level. Turkish President Recep Tayyip Erdoğan watched the parade. Turkish high-ranking officers and ministers attended the event. Thus brotherhood, solidarity were shown to the whole world. The most modern weapons were demonstrated in the parade, and the enemies also saw it. We also saw their reaction. President Ilham Aliyev said in his speech that the weapons displayed here are not all weapons of the Azerbaijani Army. I would like to mention it especially. Since, it was also a message”.

Hasanov said in his interview to Real TV that the main issue for Azerbaijani Army is the Nagorno-Karabakh conflict and liberation of the territories under Armenian occupation. "President Ilham Aliyev is implementing a very successful policy in this direction. Combat training in the army is at a high level. Modern weapons and military equipment are the indicators of high level . The second issue is the skill and professionalism of the staff. Today, 90 percent of the Azerbaijani Army consists of professional military men. Professional servicemen serve in the positions that determine combat readiness.

Recently, I have been in the tank units and I met the tankmen. Tankmen are at least 3 years in service. They are in this position for 5 years and 10 years. Naturally, it demands capital allocation. Present economic opportunities create condition for this allocation. It is necessary to form hero character of Azerbaijani soldier ".

The minister said that 80 percent of military units in Azerbaijan were reconstructed and each of them had a high level: "At present, the construction of 12 large military units is underway, and the work will probably be completed in 2019. At the beginning of next year, the rehabilitation of the Military Lyceum named after Jamshid Nakhchivansky will be completed and we plan the inauguration of the school."