​UN report: Number of refugees and IDPs is growing in the world

​UN report: Number of refugees and IDPs is growing in the world The number of people forced to flee their homes rose to 59.5 at the end of 2014
456 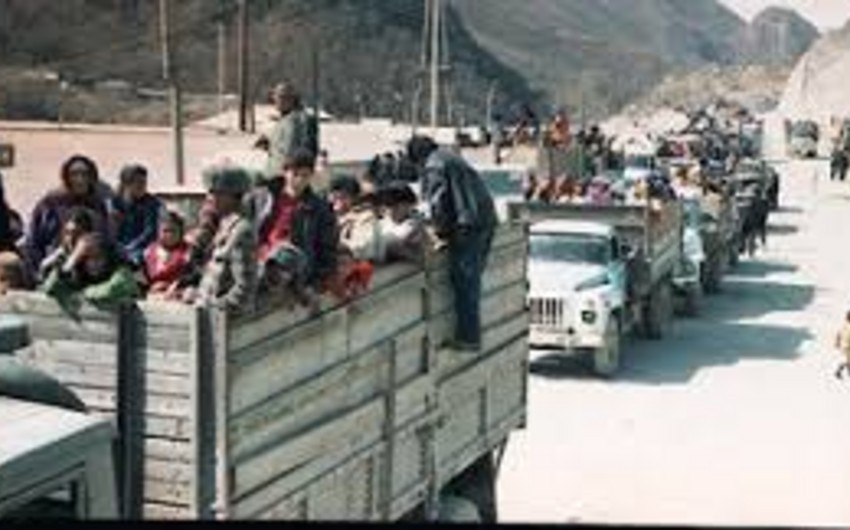 Baku. 18 June. REPORT.AZ/ The number of people forced to flee their homes rose to 59.5 at the end of 2014. Report informs, A UNHCR report, released today shows that worldwide displacement from wars, conflict, and persecution is at the highest levels we have recorded, and accelerating fast.

UNHCR’s new annual Global Trends report shows a sharp escalation in the number of people forced to flee their homes, with 59.5 million people forcibly displaced at the end of 2014 compared to 51.2 million a year earlier and 37.5 million a decade ago. The increase since 2013 was the highest ever seen in a single year.

According to the report, the main acceleration has been since early 2011 when war erupted in Syria, propelling it into becoming the world’s single largest driver of displacement. In 2014, an average of 42,500 people became refugees, asylum seekers, or internally displaced every day, representing a four-fold increase in just four years. Worldwide, one in every 122 humans is now either a refugee, internally displaced, or seeking asylum. Were this the population of a country, it would be the world’s 24th biggest.

“We are witnessing a paradigm change, an unchecked slide into an era in which the scale of global forced displacement as well as the response required is now clearly dwarfing anything seen before,” said UN High Commissioner for Refugees AntónioGuterres. “It is terrifying that on the one hand there is more and more impunity for those starting conflicts, and on the other there is seeming utter inability of the international community to work together to stop wars and build and preserve peace.”, he added.

UNHCR’s report shows, in region after region, the number of refugees and internally displaced people is on the rise. In the past five years, at least 15 conflicts have erupted or reignited: Eight in Africa (Côte d’Ivoire, Central African Republic, Libya, Mali, northeastern Nigeria, Democratic Republic of the Congo, South Sudan and this year in Burundi); three in the Middle East (Syria, Iraq, and Yemen); one in Europe (Ukraine) and three in Asia (Kyrgyzstan, and in several areas of Myanmar and Pakistan). Few of these crises have been resolved and most still generate new displacement. In 2014 just 126,800 refugees were able to return to their home countries, the lowest number in 31 years.

Meanwhile, decades-old instability and conflict in Afghanistan, Somalia and elsewhere means that millions of people from these places remain either on the move or – and increasingly commonly – stranded for years on the peripheries of society and amid the crippling uncertainty of being long-term internally displaced or refugees. Among recent and highly visible consequences of the world’s conflicts and the terrible suffering they cause has been dramatic growth in numbers of refugees seeking safety by undertaking dangerous sea journeys, including on the Mediterranean, in the Gulf of Aden and Red Sea, and in Southeast Asia.

Report says, UNHCR’s Global Trends report shows that in 2014 alone 13.9 million became newly displaced – four times the number in 2010. Worldwide there were 19.5 million refugees (up from 16.7 million in 2013), 38.2 million were displaced inside their own countries (up from 33.3 million in 2013), and 1.8 million people were awaiting the outcome of claims for asylum (against 1.2 million in 2013). Alarmingly, over half the world’s refugees are children.

“With huge shortages of funding and wide gaps in the global regime for protecting victims of war, people in need of compassion, aid and refuge are being abandoned,” said Guterres. “For an age of unprecedented mass displacement, we need an unprecedented humanitarian response and a renewed global commitment to tolerance and protection for people fleeing conflict and persecution.”

Syria is the world’s biggest producer of both internally displaced people (7.6 million) and refugees (3.88 million at the end of 2014). Afghanistan (2.59 million) and Somalia (1.1 million) are the next biggest refugee source countries.

Even amid such sharp growth in numbers, the global distribution of refugees remains heavily skewed away from wealthier nations and towards the less wealthy. Almost nine out of every 10 refugees (86 per cent) were in regions and countries considered economically less developed. A full quarter of all refugees were in countries ranking among the UN’s list of Least Developed nations.

As stated, conflict in Ukraine, a record 219,000 Mediterranean crossings, and the large number of Syrian refugees in Turkey – which in 2014 became the world’s top refugee-hosting nation with 1.59 million Syrian refugees at year’s end – brought increased public attention, both positive and negative, to questions to do with refugees. In the EU, the biggest volume of asylum applications was in Germany and Sweden. Overall, forced displacement numbers in Europe totalled 6.7 million at the end of the year, compared to 4.4 million at the end of 2013, and with the largest proportion of this being Syrians in Turkey and Ukrainians in the Russian Federation.

Long one of the world’s major displacement producing regions, the number of refugees and internally displaced people in Asia grew by 31 per cent in 2014 to 9 million people. Afghanistan, previously the world’s leading producer of refugees, ceded this sorry ranking to Syria. Continuing displacement was seen in and from Myanmar in 2014, including of Rohingya from Rakhine state and in the Kachin and Northern Shan regions. Iran and Pakistan remained two of the world’s top four refugee hosting countries.

The Americas also saw a rise in forced displacement. The number of Colombian refugees dropped by 36,300 to 360,300 over the course of the year, although mainly because of a revision in numbers of refugees reported by Venezuela. Colombia continued, nonetheless to have one of the world’s largest internally displaced populations, reported at 6 million people and with 137,000 Colombians being newly displaced during the year. With more people fleeing gang violence or other forms of persecution in Central America, the United States saw 36,800 more asylum claims than in 2013, representing growth of 44 per cent.