John Kerry: We have a responsibility to join and destroy evil force

John Kerry: We have a responsibility to join and destroy evil force In an exclusive interview with TASS US Secretary of State John Kerry has clarified the future of relations between Russia and the United States 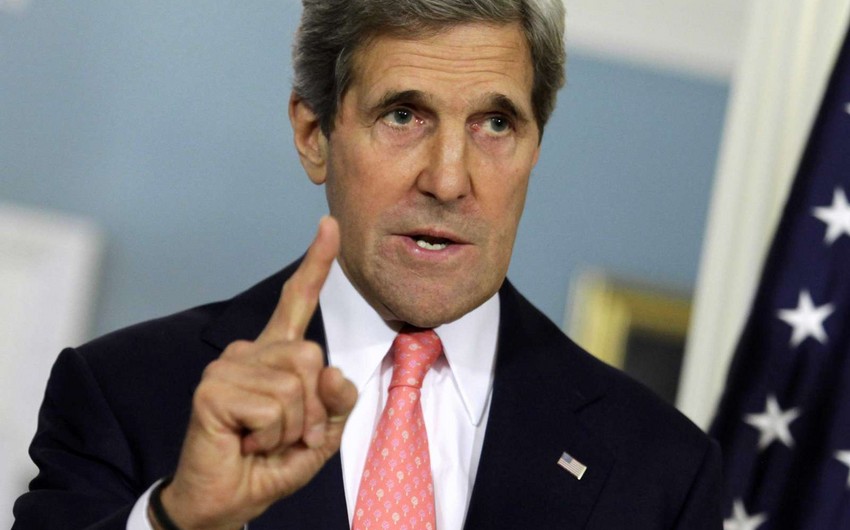 Baku. 25 March. REPORT.AZ/ US Secretary of State John Kerry has visited Russia for the third time in less than a year. In an interview with TASS First Deputy Director General Mikhail Gusman John Kerry has clarified the future of the relations between Russia and the United States.

Report News Agency referring to the TASS, presents part of the text of his interview as below:

- Mr. Secretary, welcome to Moscow. It’s very good to see you here. It’s your third visit to Russia in less than a year. And before that there was a long pause. Are we getting back to normal in our dialogue?

-Well, we’d like to get back to it. We’re making progress. I think that Foreign Minister Lavrov – Sergey Lavrov and I have had a very productive relationship and we’ve been able to separate differences and work together in a very effective way. President Putin has been very gracious to spend time with me when I’ve come here and to work at trying to find a solution to very complicated issues. I think it’s safe to say that the United States-Russia joint effort on the ceasefire has had an impact. It’s been very positive. And that’s the way we can build back to a much stronger, more effective relationship.

- Presidents Putin and Obama have been working closely to resolve our latest challenges. Open the secret, what message do you have in your pocket that you should bring from President Obama to President Putin?

- Don’t you think it’s better I give it to President Putin first? (Laughter.) No, we’re obviously very anxious to work more effectively. There are irritants in our relationship on both sides which I think both sides would like to see us be able to address. But most importantly, we all in the world face the challenge of violent extremism. And the United States, as you know, moved immediately when Daesh began to move through Syria and Iraq. We put together a 66-nation coalition. We’re actually very pleased that Russia is concerned about that extremism and wants to fight against Daesh and other extremists.

So the key here is to find clarity in our definitions, make sure we’re really working effectively together without hidden agenda in a way that can rapidly destroy Daesh, push back against the violent extremism, restore peace and stability to the region. And there’s some big choices, frankly, that President Putin and Russia needs to make with respect to how we do that. And we will talk about many of those issues.

- What’s on top of your agenda for your meeting with President Putin, is it Syria?

-Well, there are a number of priorities really in this discussion. We have a broad agenda with Russia, but at the top of the agenda obviously is Syria, Ukraine, countering violent extremism, and our efforts to work together, hopefully, to be able to advance the cause of peace and stability throughout the Middle East, but elsewhere also.

I mean, Russia is threatened by what is happening in Syria. You have Chechens who are fighting on the ground in Syria, several thousands of them. And we share the concern that President Putin has about the potential return of those terrorists to the motherland. Nobody wants to see that happen. We also don’t want to see those people going to Brussels, going to Paris, going to other parts of the world and blowing people up. The world faces a crisis of historic proportions where, unlike the last century where the former Soviet Union and the United States were involved together in fighting World War II, and Russia lost 30 million people – an extraordinary contribution to fight fascism. So if we could find that same cooperative commitment here to fighting violent extremism, we could have a profound impact on history together. And I think that the ways in which we can do that should be the centerpiece of our cooperative efforts.