US new military attaché was presented to Azerbaijani Defense Minister

US new military attaché was presented to Azerbaijani Defense Minister Zakir Hasanov: Armenia is a source of separatism, terrorism and extremism
665 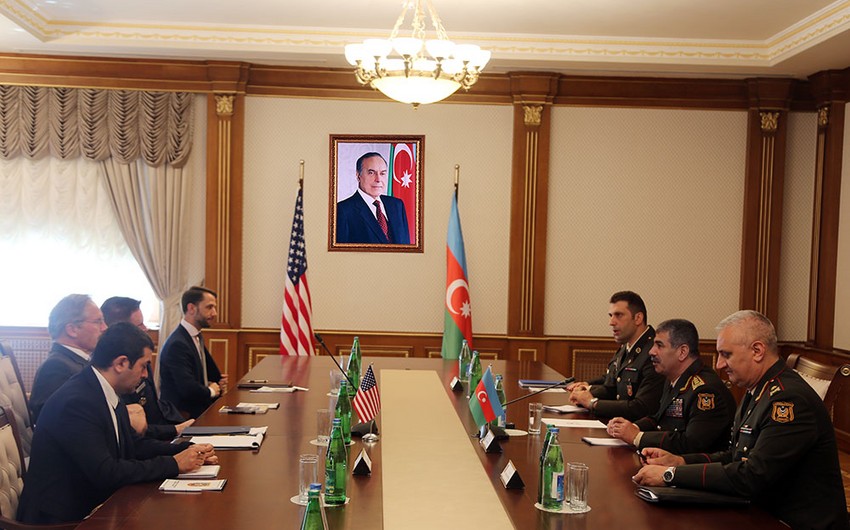 Baku. 13 July. REPORT.AZ/ On July 13, Minister of Defense of the Republic of Azerbaijan, Colonel General Zakir Hasanov has met with the US Ambassador Extraordinary and Plenipotentiary to Azerbaijan Robert F. Cekuta.

During the meeting, prospects for cooperation between the Armed Forces of the two countries, the military-political situation in the region and other issues of mutual interest were discussed.

An exchange of views was held on cooperation in the military, military-technical sphere, in the field of military education, organization of mutual visits of specialists, as well as in the areas of defense, joint struggle against terrorism and peacekeeping operations. Stressing the importance of expanding cooperation between the countries at the strategic level, the sides stressed that the support provided by the US to the energy projects being carried out by Azerbaijan will contribute to the development of US-Azerbaijan relations.

Touching upon the Armenian-Azerbaijani Nagorno-Karabakh conflict, the Defense Minister stated that Armenia is a source of separatism, terrorism and extremism. Having added that this is a threat not only for Azerbaijan, but for the whole region, the minister stressed that to prevent this threat all international structures should act together.

Noting the importance of a peaceful solution of the Nagorno-Karabakh conflict to ensure stability and security of the South Caucasus, the American diplomat expressed his condolences to the families and relatives of all those who died as a result of the conflict, in particular civilians recently killed in the village of Alkhanly.

The Ambassador, noting the successful development of cooperation between the US and Azerbaijan, both in bilateral format and within the framework of NATO programs, expressed gratitude for Azerbaijan's contribution to the peacekeeping operations conducted in Afghanistan. He also conveyed the gratitude of the Secretary of Defense and the Chairman of the Joint Chiefs of Staff of the US Armed Forces to Colonel General Z. Hasanov for condolences, sent in connection with the death of numerous American soldiers in the military aircraft KC-130.

Then the Ambassador presented the newly appointed US Defense Attaché Colonel Adam Kavlik to the Defense Minister.

Congratulating the Defense Attaché in regard with the beginning of the mission in Azerbaijan, the Minister wished him every success in expanding ties between the Armed Forces of the two countries.