Training and Education Center of Azerbaijani Armed Forces hosts a meeting Events, carried out in past period of this year analyzed, future challenges related to the combat readiness discussed 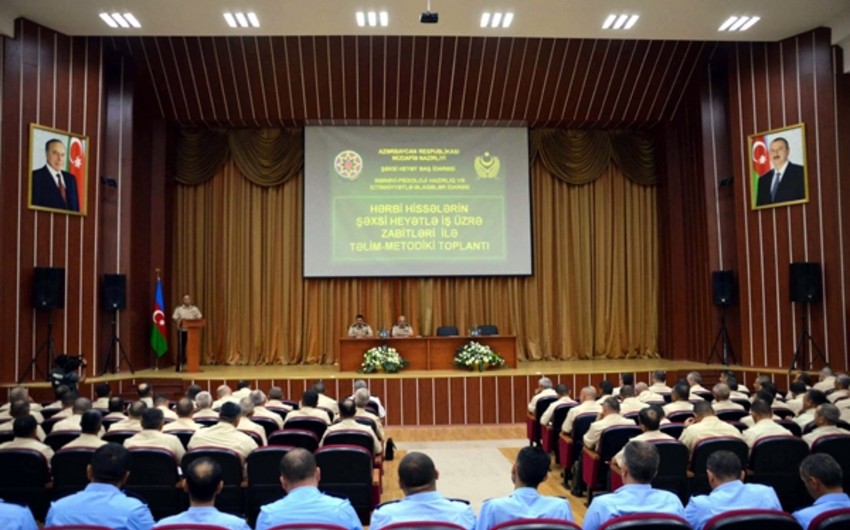 Baku. 15 July. REPORT.AZ/ Training and Education Center of Azerbaijani Armed Forces has hosted a meeting on analysis of the events held in past period of 2016 as well as on future challenges related to the combat readiness in the second half of the year.

According to the ministry, in the meeting, national leader Heydar Aliyev and those who killed for Azerbaijan's territorial integrity were commemorated with a minute's silence.

Chief of Moral and Psychological Training and Public Relations Department Major General Rasim Aliyev drew attention to the event's agenda. Deputy Defense Minister for Staff - Chief of Staff Main Department, Lieutenant General Karim Valiyev analyzed combat and moral-psychological training of the staff during the first half of this year.

Mentioning provision of apartments to the servicemen by President of Azerbaijan, Supreme Commander-in-Chief Ilham Aliyev on the eve of the day of Armed Forces as one of the important steps taken to improve the living conditions of servicemen and their family members, Deputy Minister has reminded appreciation of moral-psychological and combat training of Azerbaijani Army by the head of state during the meeting with families of the servicemen.

Then Deputy Minister expressed his confidence in further high-level implementation of all tasks given by the Supreme Commander-in-Chief and Defense Minister. The meeting continued with speeches of staff officers, members of the public, scientists, intellectuals as well as with discussion of various topics.