Defense Minister met with Commander of US Transportation Command Baku. 17 December. REPORT.AZ/ Minister of Defence of the Republic of Azerbaijan, Colonel General Zakir Hasanov met with the delegation led by the Commander of US Transportation Command (USTRANSCOM), General Darren W.McDew.

Report was informed in the press service of Azerbaijani Ministry of Defence (MOD), Minister of Defence welcomed the guests and informed them about the military-political situation in the region, the continuation of Armenian occupation policy, increasing the cases of violation of ceasefire in the frontline zone in recent years and the carrying out of these acts of provocation by the Armenian armed units.

Colonel General Z.Hasanov touching upon the issue of strengthening nuclear security in the region stressed that this is a serious problem not only for the region but also for the whole world.

Colonel General Z.Hasanov speaking about positive results achieved in various areas of cooperation between Azerbaijan and the United States expressed his satisfaction with the expansion of mutual ties.

Commander of USTRANSCOM expressed gratitude for the contribution of Azerbaijani Armed Forces into the International Security Assistance Force in Afghanistan and highly appreciated the fruitful military cooperation between the two countries.

The sides discussed a number of other issues of bilateral cooperation. 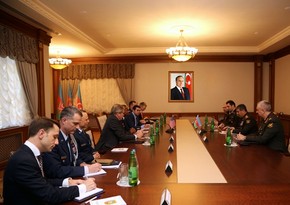