Mammadyarov: Armenian refugees from Syria are being illegally settled in occupied territories of Azerbaijan 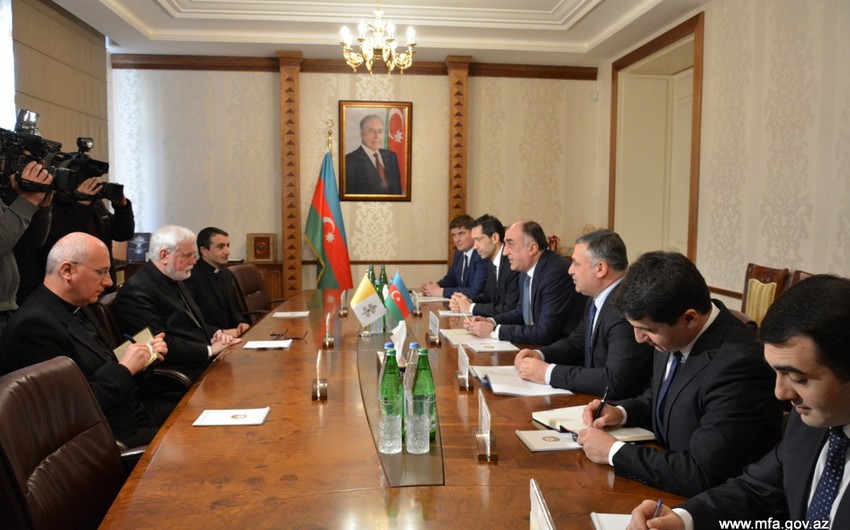 Report was informed in the Azerbaijani Ministry of Foreign Affairs (MFA), the sides expressed their satisfaction with the development of relations between Azerbaijan and the Holy See. It was underlined that the official visits of Heydar Aliyev, President of the Republic of Azerbaijan on September 24-27, 1997 and Ilham Aliyev, President of the Republic of Azerbaijan on March 6, 2017 to Vatican, as well as the historical visits of Pope John Paul II on May 22, 2002 and Pope Francis on October 2, 2016 to Baku ushered in a new page in Azerbaijan-Holy See relations.

Minister Elmar Mammadyarov noted that Azerbaijan has historically been a place where the representatives of different cultures and religions co-exist peacefully. The Minister reiterated that on the basis of national traditions of tolerance Azerbaijan promotes the ideas of peaceful co-existence, mutual respect and multiculturalism in the world. In this regard, the importance of International Humanitarian Forum and Intercultural Dialogue Forum was underlined.

Noting his satisfaction with being in Azerbaijan P.R. Galagher noted his meeting with Ilham Aliyev, President of the Republic of Azerbaijan adding that very fruitful discussions took place at the meeting. Expressing his gratitude for the support and care to the Catholic community in Azerbaijan the Archbishop highly appreciated the tolerance and respect to other religious communities in Azerbaijan.

Minister Elmar Mammadyarov said that the year of 2017 had been declared “Islamic Solidarity year” in Azerbaijan. Adding that international conference on “2017 - Islamic Solidarity Year: Interfaith and Intercultural Dialogue” was jointly organized by the Caucasian Muslims Office and the State Committee for Work with Religious Organizations and the representative of the Holy See took part at the above-mentioned conference.

Noting the close cooperation between the Pontifical Council for Culture of the Holy See and Heydar Aliyev Foundation the sides underlined the invaluable role of Azerbaijan's First Vice-President Mehriban Aliyeva in the further development of cooperation to this end. The restoration of several historical monuments especially the catacombs in Vatican with the direct support of Heydar Aliyev Foundation had been highly appreciated.

Mentioning several precious documents in the Holy See’s archives on middle ages history of Azerbaijan Minister Elmar Mammadyarov thanked the Holy See for the support in finding these documents and underlined the importance of continuation of cooperation in this sphere.

At the meeting Minister Elmar Mammadyarov briefed his counterpart about the negotiation process on the resolution of Armenia-Azerbaijan Nagorno-Karabakh conflict, just and fair position of Azerbaijan, Armenia’s plundering and destruction policy of the cultural heritage of Azerbaijani people in the occupied territories of Azerbaijan. Touching on the issue of illegal settlement of ethnic Armenian refugees from Syria in the occupied territories of Azerbaijan by Armenia Minister Mammadyarov noted that Armenia's deliberate efforts to pursue the settlement policy and change the demographic structure of occupied territories seriously violate the international humanitarian law. The Minister added that as a result of Armenia's aggression more than one million Azerbaijanis were forcefully subjected to ethnic cleansing by Armenia.

The interlocutors expressed their mutual concern about the raise of racism, xenophobia, ethnic and religious hatred in the world.

At the meeting the sides also exchanged their views on the issues of developing the relations between Azerbaijan and the Holy See and mutual exchange of high level visits. 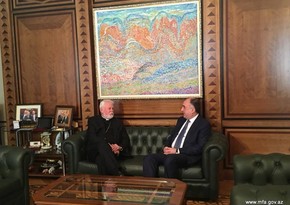 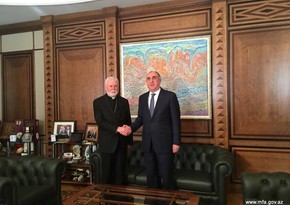