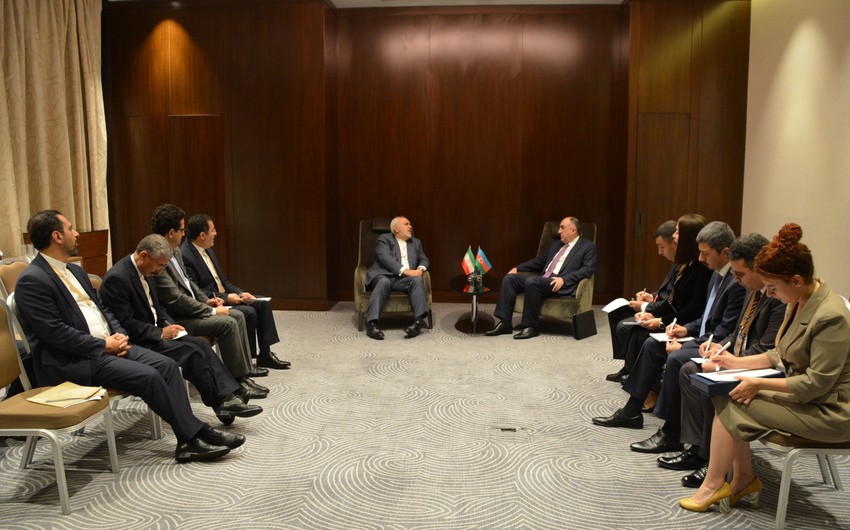 On the sidelines of the 18th Summit of Heads of State and Government of the Non-Aligned Movement held in Baku Foreign Minister Elmar Mammadyarov met Mohammad Javad Zarif, the Minister of Foreign Affairs of the Islamic Republic of Iran, Report informs citing the press service of the Foreign Ministry of Azerbaijan.

The Ministers exchanged views over the issues of bilateral cooperation agenda of friendly and good neighborhood relations existing between the two states based on common historical, religious and cultural links.

The Ministers pointed out that mutual respect and trust between the Presidents of the two countries play a crucial role in the Azerbaijani-Iranian relations. In this regard, the Iranian Minister thanked the Azerbaijani side for the hospitality and organization of the NAM Summit at a high level.

During the conversation, it was noted that the successful development of regional cooperation in both bilateral and multilateral formats opens wide prospects. In this context, it was underlined that great transport corridors, including railways created with the initiative and participation of Azerbaijan would present bright opportunities.

At the end of the meeting, Minister Mohammad Javad Zarif wrote his heartfelt words in the Memorial Book dedicated to the 100th anniversary of the Diplomatic Service of the Republic of Azerbaijan.

At the meeting, the sides also discussed regional and global issues of mutual interest.