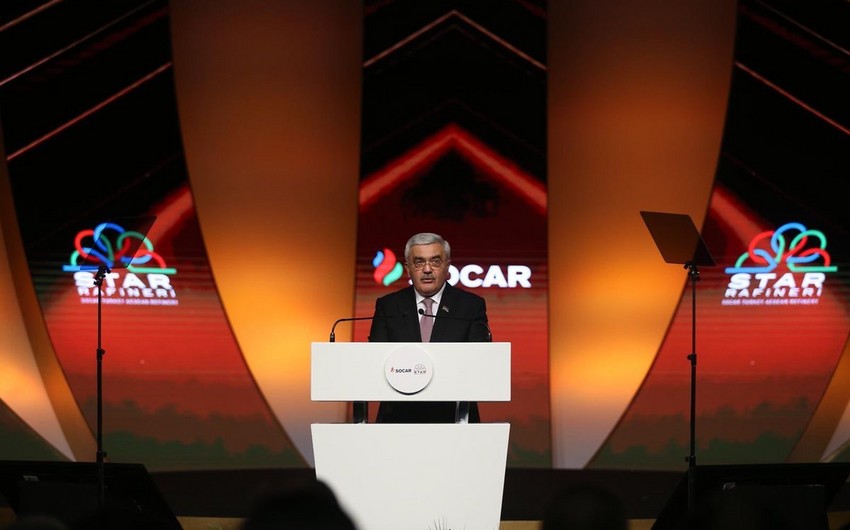 "10 years ago we, being the SOCAR company, purchased the control share in Turkey's petrochemical giant Petkim with the blessing of the President of Azerbaijan Ilham Aliyev, the follower of Nationwide Leader's political course

"Over the past decade we invested hundreds of millions of dollars into Petkim. We intend to further increase our share in Petkim in Turkey's market of petrochemical products through the implemented investment programs and the process of works show that it is quite real to achieve this goal," he said.

Rovnag Abdullayev reminded that seven years ago, in October of 2011 Ilham Aliyev and Recep Tayyip Erdogan started the projects whose opening is marked today. "It was the first time that we implemented such a major investment program beyond the country. We mobilized all our forces for the worthy fulfillment of this task and I would like to say with the feeling of pride that the STAR oil refinery is ready for operation."

The SOCAR president said that the STAR oil refinery is designed with the state-of-the-art equipment which will make it possible to refine a broad range of oil grades. "These investments will strengthen our position on the Mediterranean markets. The refinery will produce naftha for Petkim and thus will significantly reduce Turkey's dependence on import. The plant will also produce other petroleum intermediates for petrochemical industry which will be consumed on the domestic market and open up wide opportunities for export.

Petlim and projects of wind power plants are important in terms of effectiveness of our activity in Turkey. We are happy with the completion of the implemented projects, but every completed project plays a basic role for the projects planned for future. In this regard, we have launched works for creation of a new petrochemical complex in the Petkim peninsula in the nearest future."