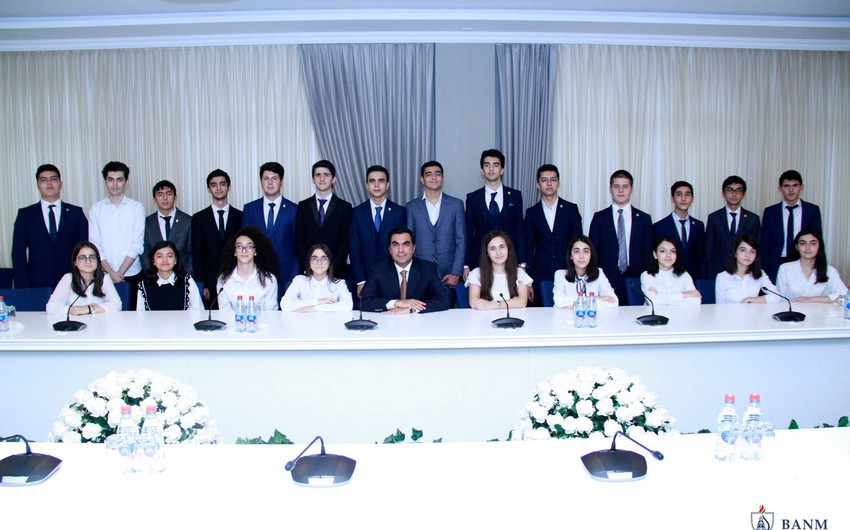 Rector of Baku Higher Oil School (BHOS) Elmar Gasimov met with the students who entered the BHOS in 2019 and were awarded the Presidential Scholarship for the excellent results they had achieved in entrance exams, Report informs citing BHOS's press service.

He said the number of Presidential Scholarship holders has increased to 150 students since the creation of the Baku Higher Oil School.

The rector stressed that the maximum number of presidential scholars of Baku Higher Oil School falls on the 1st group, in which there has always been observed great competition.

“According to the relevant Decree, this year 102 people were awarded the Presidential Scholarship. Of the 23 presidential scholars of BHOS, 15 chose the specialty ‘Information Security Engineer’, 5 – ‘Process Automation Engineer’, 2 – ‘Chemical Engineer’, 1 – ‘Oil and Gas Engineer,’” he added.

Elmar Gasimov expressed confidence that each of the presidential scholars will justify the trust shown to him at the highest level.

The rector praised highly the interest shown by the presidential scholars in the Baku Higher Oil School, and emphasized that the choice made by the students will play an important role in their future careers.

Noting that the presidential scholars achieved this success thanks to enormous efforts applied by educational institutions, teachers and parents, ElmarGasimov wished the students good luck in their future studies.

The students, in turn, expressed gratitude for the excellent conditions created in the school for their education.

Note that 9 of the Presidential Scholarship holders are girls, 14 - boys. When choosing a speciality, the presidential scholars gave preference to thespeciality "Information Security Engineer".It is not by accident that this speciality, whichhas the highest passing score in the country, was declared the “Speciality of the Year”.

The specialty “Process Automation Engineer” also has the highest passing score among universities in the country.