Moldova's famous media outlets have published articles about the arrival of the largest Airbus A340-500 passenger plane belonging to Azerbaijan Airlines flying from Baku at Fizuli International Airport, the first airport in the liberated Karabakh region of Azerbaijan.

According to Report, articles published on the websites "tribuna.md," "ava.md," and "noi.md" state that before the commissioning of Fuzuli International Airport, the largest Airbus A340-500 passenger plane owned by Azerbaijan Airlines conducted a test flight and landed at the first airport of liberated Karabakh on September 5.

Symbolically, the plane is called "Karabakh": "A Boeing 747-400 aircraft, one of the giant cargo planes of Azerbaijan's Silk Way Airlines, also landed at Fuzuli Airport today. For the first time, the cargo was delivered to Karabakh by air. The duration of the flight on the Baku-Fuzuli route was 35 minutes."

According to the articles, a parking lot for 150 cars was built in front of the passenger terminal, scheduled to be commissioned in late September. Also, the construction of a highway connecting Fuzuli International Airport with the "Victory Road" and the road to Shusha is underway. Moreover, landscaping works are continued at the airport," the Moldovan media reported. 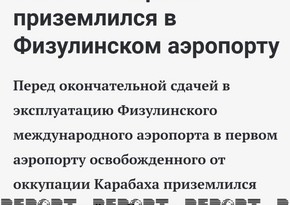 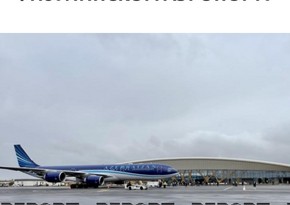