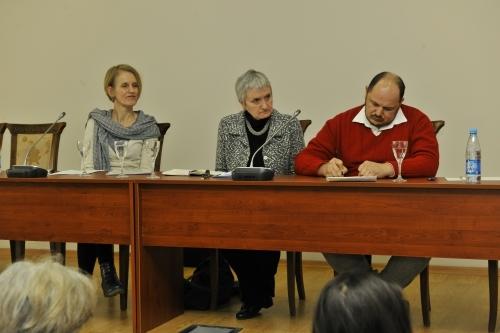 Baku. 25 February. REPORT.AZ/ The seminars-trainings are organized for the employees of the museums to increase the level of development of Azerbaijani museums to the world's leading museum standards with a joint initiative of the Culture and Tourism Ministry and the British Council (British Council Azerbaijan). Report informs referring to the statements of the Ministry of Culture and Tourism.

Due to the implementation of the project, a regional consultant of the British Council Museum, Library and Archives Mrs. Jane Viksi and an expert in this field, Ms. Johanna van Mil visited Azerbaijan.

The meeting was held with the participations of Sevda Mammadaliyeva, Deputy Minister of the Ministry of Culture of Azerbaijan, and Azada Huseynova, Director of Museum Department, Chingiz Farzaliyev, Director of National Museum of Arts, and Irfan Siddiq, UK Ambassador to Azerbaijan, as well as Elizabeth White, British Council Director yesterday.

Speaking at the meeting, Deputy Minister Sevda Mammadaliyeva noted that British Council's activities in our country contribute to further strengthening friendly relations between the UK and Azerbaijan and the successful development of bilateral cooperation in various fields.

From the beginning of its activity in Azerbaijan, the British Council began an active cooperation in the field of art and culture.
Every year, tourism companies of the two countries regularly participate in the tourism exhibitions held in Azerbaijan and the UK. It has a positive impact on the growth of the tourist trips.

The Ambassador of the United Kingdom of Great Britain and Northern Ireland to Azerbaijan Irfan Siddig expressed his gratitude for the support for the implementation of the project in the event.