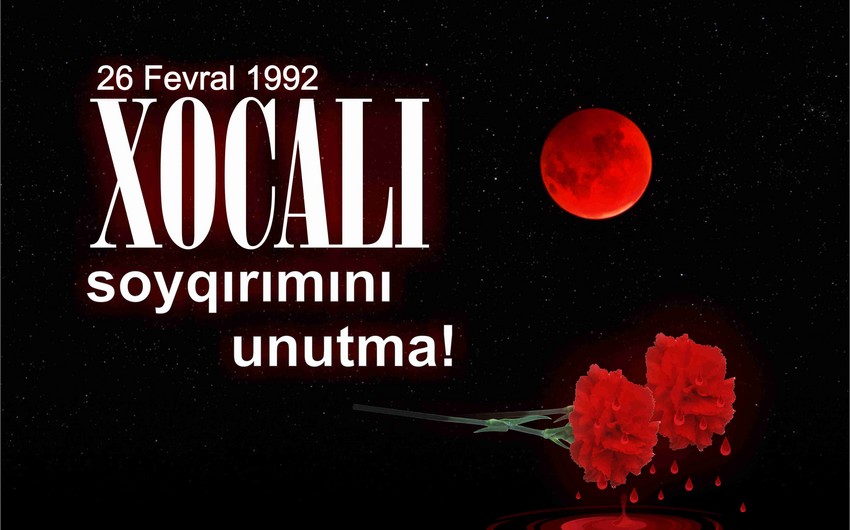 Baku. 21 February. REPORT.AZ/ Unfortunately, the month of February remembered with a tragedy in Azerbaijan and world history.

Twenty-five years ago, on February 26, Armenians with the help of 366th motorized rifle regiment of the post Soviet army committed genocide against Azerbaijanis in Khojaly town of Azerbaijan which was occupied by Armenia. The nature of this massacre is well known to the international community from Genocide of Jews in Nazi Germany during the Second World War.

In 1988-90 "cleaning" Armenia from Azerbaijanis, Russians and other ethnic groups, Armenians with the comprehensive support of trustees once again committed genocide in Nagorno-Karabakh.

But now, they hold "referendum" in the Azerbaijani lands of Nagorno-Karabakh under the occupation of Armenia.

Permanent Mission of the Republic of Azerbaijan to the OSCE has raised issue regarding Armenia's intention to hold illegal "referendum" in the occupied territories of Azerbaijan, Nagorno-Karabakh during the OSCE Permanent Council meeting.

In violation of international law rally held in the occupied territories of Azerbaijan with support of Armenia.

Whereas the principled basis for the liberation of the occupied territories of Azerbaijan is laid down in the United Nations Security Council resolutions 822(1993), 853(1993), 874(1993) and 884(1993) and the U.N. General Assembly resolution 62/243 (2008), which condemn the use of force against Azerbaijan and occupation of its territories and reaffirm the sovereignty and territorial integrity of Azerbaijan and the inviolability of its internationally recognized borders.

The Ministry of Foreign Affairs of the Republic of Azerbaijan in a statement regarding "referendum" said: the illegal regime established by Armenia in the temporarily occupied territories of Azerbaijan is ultimately nothing other than the product of aggression and occupation. It is under Armenia’s direction and control and survives by virtue of its military, political, financial and other support.

This provocative step, as well as Armenia’s attempts to change the name of integral Nagorno-Karabakh region of Azerbaijan is yet another clear manifestation that Armenia is not genuinely interested in seeking a political settlement of the armed conflict.

It was added that neither co-chair countries, nor any country in the world recognizes Nagorno-Karabakh as an independent entity.

Russia that plays a key role in resolving the conflict has made a separate statement regarding the so-called "referendum": We do not recognize Nagorno-Karabakh as an independent state. We believe that it is important to determine the status within the framework of the Minsk process through political negotiations".

Neighboring Iran also does not recognize the so-called regime in Nagorno-Karabakh.

Apparently, all of the international organizations and states mediating to the settlement of the conflict while recognizing Azerbaijan's territorial integrity do not recognize the so-called regime.

At that time, some of the right questions naturally arise: For which funds the so-called organization exists in occupied territories of Azerbaijan?Who helps the aggressor to carry out such actions? Why Azerbaijani lands are under occupation when countries issuing a statement recognize the territorial integrity of Azerbaijan.

To answer these questions, we would like to show some similar examples from events. The world's leading powers, regional states claim that they are fighting against ISIL. On April 9, 2013, group leader Abu Bakr al-Baghdadi in his statement released as an audio recording announced that Jabhat al-Nusra allied with ISIL. That year Baghdadi said Jabhat al-Nusra and ISIL come together under the name of Islamic State.

Thus, the organization exists in Syria and Iraq for 4 years. A part of Syria and Iraq occupied for 3 years. As a result of occupation by ISIL, only 3.5 million refugees from Syria and Iraq sought refuge in Turkey. Thousands of people have been killed by terrorists.

However, this terrorist group still remains in the region. Even though everybody claims to be against ISIL, this group still exists. They are provided with weapons, ammunition, food, clothing and medical equipment. Who is standing behind them? No one has responded to this question openly yet. However, most can describe those who support ISIL and other such groups. Because there are no real facts about ISIS's belonging to any state or power.

Nagorno-Karabakh region of Azerbaijan also occupied by separatist terrorists. One of their leaders are former president of Armenia Robert Kocharyan and current president Serzh Sargsyan.

Under the command of these forces more than a million of local Azerbaijanis were expelled from their ancestral lands by force.

Thus, Armenia continues aggressive policy in the occupied territories with the help of sponsors, commits an international crime and violates international law. No anti-terrorist measures are taken in Nagorno-Karabakhat the international level. Even no sanctions imposed against them.It means terrorists in Azerbaijani territories are being supported.