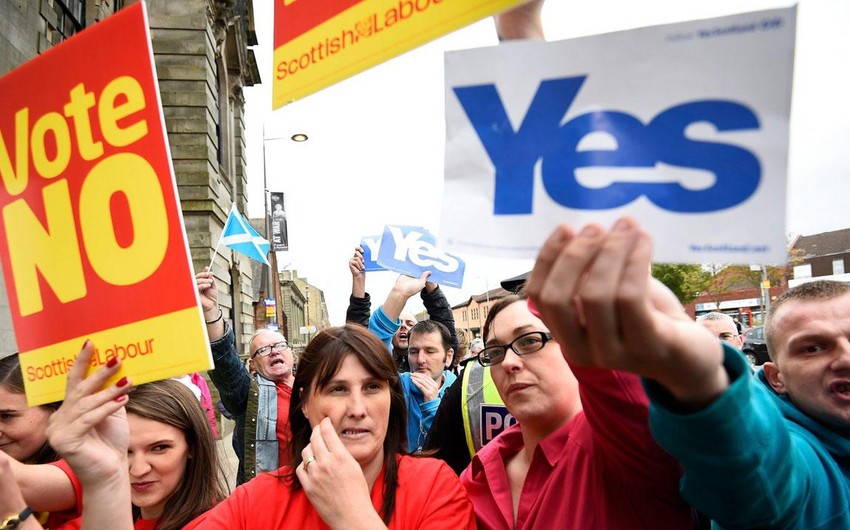 Baku. 2 October. REPORT.AZ/ Over the past week, the world community has witnessed two "referendums" on “independence”. One of them is Iraq, which is partly occupied by ISIS and trying to clear extremists in the land with the help of an international coalition, led by the United States. "Voting", initiated by the local government in northern Iraq, has not been officially recognized by Baghdad, Turkey, Iran, the U.S., UK, Russia, France, the European Union and others, calling it "illegitimate, contrary to the Iraqi constitution”. This "referendum" was supported only by Israel. However, this does not mean the recognition of the "independence" of the Kurdish autonomy in northern Iraq.

Another "political action" was held in EU member, Kingdom of Spain. Along with combating terrorism, Spain has suffered from this crime committed internationally.

The central government considers this "referendum" illegal. Prime Minister of Spain Mariano Rajoy said the results of this "action" would be abolished in the Constitutional Court. Carles Puigdemont, the head of Catalonia's pro-sovereignty government, has signed a law on independence "on the event”.

The Catalonia government says more than 90 percent of voters voted for independence, while official Madrid even said the results were falsified.

The referendum in Catalonia has not been calm. 12 police officers were injured, more than 800 participants were detained, majority were injured.

Daana Evarts from Kingdom of the Netherlands, a citizen of New Zealand Halen Katt, and 14 people including international expert and observers headed by Dimitrij Rupel, former Minister of Foreign Affairs of the Republic of Slovenia took part in “referendum”.

No matter how bitter and ridiculous, such observers use the name of democracy, as a rule, violate international law and the laws of the country.

It is also a well-known fact that democracy is not a tool to violate country laws and ignore international law.

The U.S. and the EU have not yet commented on the results of “referendum”. Two days before action Chairman of the European Parliament, Antonio Tajani, stated: "The referendum in Spain is against Spanish Constitution and European law. Discussion of the matter between the Spanish government and the Catalonian government at the political level would be the best solution. This talk is important for Spain. This is an internal problem of Spain not Europe”.

European Commission president Jean-Claude Juncker, made a distinct statement on September 14, saying: "If Catalonia achieves independent, we will respect this option. However, Catalonia can not be a member of the European Union on the eve of Independence”.

Deputy Chairman of the Parliamentary Assembly of the Council of Europe (PACE) Roger Gale has issued a statement on conflict on "referendum" day. He said: "We are sorry for the conflict. We invite both parties to the dialogue".

Ministry of Foreign Affairs of Azerbaijan commented on the "independence referendum" held in Catalonia, Spain. The Foreign Ministry emphasized that the Republic of Azerbaijan respects the territorial integrity and sovereignty within the internationally recognized borders of the Kingdom of Spain: "We are in favor of a peaceful settlement of the current situation within Spanish Constitution and laws."

It is not excluded that during the day and after the referendum political relations will be expressed.

Catalonia residents hold this action for the first time. This autonomous province is located in the northeastern part of Spain, on the Iberian Peninsula. The official name is Catalonia Autonomous Province. Territory of the region is 32 thousand 114 sq. km. The center of the state is the city of Barcelona. The official languages of the Catalonia are Catalan, Spanish and Oceania. The province's population is 7 million 512 thousand 381 people.

Historical Catalonia consists of autonomous provinces in Spain and the Eastern Pyrénées Department in France. In addition, Catalonians called territories of France joined the Province of Catalonia the Northern Catalonia.

The Basque country is also an autonomous region in Spain. This province is located in the north of Spain and in the south-west of France. Territorial autonomy status was granted by Spain on July 25, 1979. Basques are not dependent on Spain in many issues. Police force called Ertzaintza protects that area. Moreover, most of the revenues from tourism, finance, and taxes go to the budget of the Basque Autonomy, but not to Spain. The area is 7,234 square km and the population is 2 million 125 thousand people. It is capital city of the Vitoria-Gasteiz autonomous region.

Notably, Eucalyptus, alongside Spain, live in the southwest of France (in the western part of the Pyrenees-Atlantiques department, Labourd, and Lower Navarre).

Corsica is located north of the Mediterranean Sea. The territory of this island is 8.7 thousand square kilometers. Napoleon Bonaparte was born in the city of Ajaccio, capital of Corsica. Different figures mentioned about their number: From 600 to 2.8 million in Spain, from 75 to 250 thousand people in France, 6.9 thousand in the U.S., 20 thousand people in Mexico and so on speak Basque. Spanish and French languages are widely used among them.

The Flemish people in Belgium also said they wanted to get out of this monarchy. That's why a few years ago there was a government crisis in Belgium.

By the way, the flemish live in 5 northern provinces of Belgium. Their area of land is 13 thousand 522 square km. This means 44.29 percent of Belgium territory. Five million flemish live in the kingdom. There are 250 thousand flamands in north of France. According to the data, the total number of Flemish people is 7.5 mln.

There is a possibility that similar events will take place in the leading European states.Scotland has held a referendum on leaving the UK. Although the result was not what they wanted, this step was taken. Northern Ireland is expected to take such a step.

Those who want to be independent are citizens of the leading European states. The worst and ridiculous thing is that these states support the separatist tendencies in other countries.

The most obvious example of this is the issue of Azerbaijan's territorial integrity. Spain, Britain, Belgium, the Netherlands, France and others have condemned the occupation of the territory of Azerbaijan and have not imposed any sanctions against separatists yet. Statements from this and other similar states sound like this, "Protect your ceasefire, negotiate".

Another example. In the Middle East this process carried out with gun. Separators are armed with European and Western powers. They are also given instructions in the countries of this part of the world.

Events in the autonomous province of Catalonia have become miserable. Clashes take place with the police. There is another reason for the population to join the centralization process. There is no doubt that leading European states are giving a boost to this. They turn blind eye to separation of Spain. Separation tendencies are not prevented at right time. Separators are divided by interests in the world: those which are not in the interest of the European Union, U.S. and Russia. One of the ways out of this issue is undoubtedly the international law and the constitution of the countries.

Unfortunately, these two factors are not respected. The West, European Union sees the fruit of its policy pursued in the Middle East, South Caucasus its support to separatism in Spain. In other words, West tears the Kingdom of Spain apart. It is not excluded that this process will move to other European countries in the future.

Therefore, it is not ruled out that new states will emerge not in Asia, Africa and America, but in Europe, and the political map of the world will change.

As the proverb says: “As you sow, so shall you reap”.

Thus, the states established in Europe as a result of the two world wars in the twentieth century may break down.