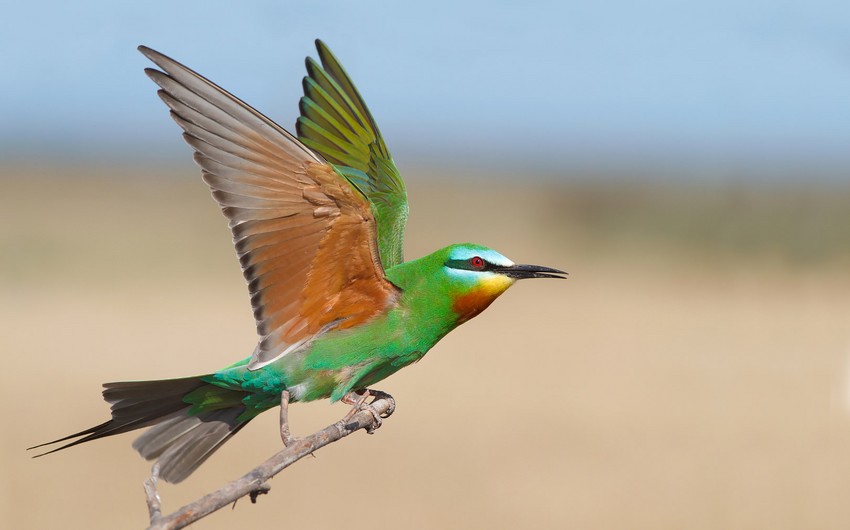 Imagine a birding day that begins with a chill amid spectacular alpine scenery at almost 3,000 m and finishes in sultry coastal marshes, gradually descending through a myriad of wildlife-rich habitats as varied as verdant wooded valleys and arid lowland semi-desert.

It sounds too good to be true. Surely it's not possible to visit so many different ecological niches between sunrise and sunset? Well, in the Caucasian nation of Azerbaijan, it is.

Such an assorted schedule is a testament to the wealth of different habitats that this small country harbors. Small is the operative word: it's just 250 miles from Lankaran, close to the Iranian border in the south, to Quba, the gateway to the Azeri Greater Caucasus, which is about as far north as you can get without straying into Russia.

Within the south-east Western Palearctic (WP), many are drawn to the appeal of neighboring Georgia for its high-mountain Caucasian specialties, or Turkey for terrific all-round birding, but few realize that Azerbaijan – situated on the western shore of the Caspian Sea and at the very eastern edge of the WP – offers the best of both these destinations set among an array of epic landscapes, despite its diminutive size. Add to that a handful of breeding species found almost nowhere else in the WP, such as and , and a visit sounds all the more tempting.

Rather like its peripheral position on the easternmost boundary of the WP, Azerbaijan remains a destination on the edge of many birders' radars, despite its obvious appeal. Despite there has been an upturn in visiting birders since 2010, as well as the establishment of a constant-effort watchpoint at the migration hot-spot of Besh Barmag, the country remains relatively unexplored. A perfect example of this is the range-restricted , which is largely confined to the mountain forests of northern Iran. It was known to just about extend into Azerbaijan, but there had not been any documented records for decades, until 2017, when it was 'rediscovered' in the Hyrcan National Park. Now it is once more a realistic target for visitors.

While the scarcer inhabitants undeniably play their part in making Azerbaijan an attractive destination, it is the pristine ecosystems – and the great volume of life that they support – that confirm its appeal. Traditional practices mean that the agricultural lowlands of the coastal south are teeming with birds: and sing from every bush as countless and keep watch from the overhead wires and lollop around in their vivid ways. Such abundance is something sadly consigned to the history books across intensively farmed western Europe, and it is uplifting to see such numbers still persist here.

It's often said that the presence of apex predators symbolizes the health of an environment, and Azerbaijan is home to thriving populations of Brown Bear, Wolf, and even Caucasian Leopard. While the last remains extremely rare, recent camera-trap studies suggest that numbers are on the increase. Catching sight of any of these impressive mammals involves a large slice of luck, but the first two are possible in the right areas – we had great views of a lone Wolf (no pun intended) in the Greater Caucasus one May morning.

The entire nation comes alive in spring. The countryside is in bloom. The temperature is pleasant, returning breeders, adorned in their summer best, join the residents in their droves, with all species at their most conspicuous as they sing and display, driven by the insatiable urge to reproduce. What's more, huge numbers of northbound migrants move through on their way to higher latitudes, where they will soon fill the vast expanses of steppe, taiga, and tundra across Siberia.

This concoction of residents, summer migrants, and passage visitors ensure that spring (specifically mid-April until early June) produces the highest trip lists. In a two-week spring trip to Azerbaijan and its autonomous enclave of Nakhchivan, which is easily reached via a short internal flight from Baku, a trip list in excess of 250 species is entirely realistic.

May is probably the perfect time to visit for the greatest range of species as the last of the winterers still hang on in the early part of the month. The vast majority of summer visitors will be in, and migration will always be conspicuous. Our fortnight-long trip commenced on 3 May 2015, with the relatively early date chosen with the high-mountain specialties of the Greater Caucasus in mind – in theory, snow would still linger at lower altitudes at this time, meaning species such as and have not ascended as far as they would later in the month when the snow melts, making them easier to connect with.

This rang true. On our first morning, which dawned clear with a light ground frost, we scored all three of our targets – redstart, rosefinch, and – just below the snowline at 3,000 m, high above the eye-catching hilltop settlement of Khinaliq. Scrambling around slopes at such altitude takes the breath away both physically and metaphorically – rarely does birding in the WP come with such an imposing view. The redstarts were as beautiful as they were large, very much a reflection of their epic surroundings. The eerie, curlew-like wails of the snowcock echoed around us, punctuating a therapeutic silence in this high-mountain domain. There was a curious feeling of peace: nature, going about its business, undisturbed by man. It was special.

The tranquillity was shattered as several snowcocks erupted raucously from a crag. A was cruising above, watching them intently, before taking a half-hearted plunge at once. These majestic birds routinely patrol these slopes, hunting snowcock, while also often pass at eye level, ogling back with curiosity. Sometimes these resident raptors are joined by their more transient cousins – we watched and pass to the north as the heat of the day took hold. At this height, it was even more curious to hear the soft prrt of well above us.

These slopes must be the best place for Güldenstädt's Redstart in the WP. Each day we saw double figures. While searching for them and the other desirables, commoner species such as , , and the local subspecies of , , and littered the slopes. On one memorable occasion, our lunch was interrupted by two territorial viciously fighting and ultimately ending up soaked in a small meltwater stream.

Where there was vegetation, and sang. At the same time, a vigil at a nearby village produced a distant lek of Caucasian Grouse on the high slopes – the males jumping vertically and comically flapping their wings. Descending further, to where the valleys become forested, the spluttered song of was omnipresent, while both and were seen.

The Greater Caucasus provides a massive draw for any visitor to Azerbaijan, but it is just one element that makes it such a memorable birding destination. From Khinaliq, at 2,500 m, it's just a couple of hours' drive to the arid shores of the Caspian Sea, emphasizing just how quickly and dramatically landscapes can change here.

Coastal wetlands are dotted along the entire Caspian shore, although arguably none is more impressive than Ghizil-Agaj State Reserve, where a mosaic of expansive lakes, shallow scrapes, reedbeds, and scrub draws in a huge variety and number of birds. We had unwittingly timed our visit perfectly for migration: the skies were replete with them, swirling like a hatch of insects. We estimated more than 50,000 present, all in pristine breeding plumage, with a couple of thousand thrown in for good measure – jaw-dropping.

belted out their repertoires from every patch of reeds, while the odd and sang from cover. and went hurriedly on their ways, and barked, though a handful of dozing was rather less cheerful. Another lagoon, to the north, was carpeted in thousands of passage waders: more than 400 frenetic, spinning and more than 200 and 150 were among the Little commoner and . Not all were migrants, though – we found several breeding pairs of the terrific in the vicinity.

Then, the highlight. Driving along a dusty track that afternoon, we were suddenly surrounded by . This species is relatively common along the coast, and we'd seen ones and twos hunting from wires, but this was different – they were everywhere. Then it became clear why: the track passed right through a colony. They were nesting in the ground, as the dozens of burrows testified, and it was surreal watching these vivid birds scuttling off into the subterranean. We sat and took it in, watching over 100 birds at point-blank range. Highlights such as these come thick and fast along the coast in Azerbaijan – there is such an abundance of new species rare elsewhere in such numbers.

The Lesser Caucasus supports its list of desirable birds to pad out the trip list further. Via a stop for in Masalli, a short drive into the Talysh Mountains offers the striking poelzami subspecies of – a good candidate for splitting – while ascending above the forest line produces exotic roadside birds such as and . Among the beautiful array of commoner species here, targets include on the plains and and on the higher slopes, all among more beautiful, human-less scenery close to the Iranian border.

The exclave of Nakhchivan, isolated from the 'mainland' following the Armenia-Azerbaijan war of the 1980s, can only be reached by air but is even more immaculate and uncharted. Flights operate several times daily from Baku. Birding in the region gives the chance to see scarcities such as , , , , and among delightful rolling landscapes.

Birds are once again abundant: hordes of rove the plains, wheeze from hilltop boulders, and was a trip tick for us. Raptors, particularly vultures, are common, and it's easy to see all four European species in a day. It's also worth looking out for Sheltopusik, a meter-long legless lizard, which is numerous.

A spring trip covering the areas mentioned above will already boast a weighty species list on returning to Baku. Yet, a visit into the country's hot and dry interior as a final port of call will bolster it further. and are numerous, and patches of scrub hold . Patiently searching the shrinking winter pools in this dusty landscape can reveal breeding and , with the odd overhead.

Amid stunning landscapes, birding in Azerbaijan was quickly among the best I've experienced anywhere in the world. Such diversity and abundance were uplifting alone, but with so many top WP ticks and fantastic photo opportunities, plus no considerable distances to travel, few destinations offer such a complete package for a rewarding birding holiday than this small Caucasian nation. 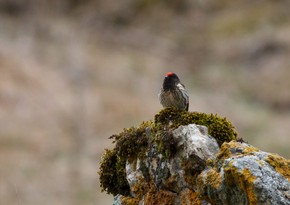 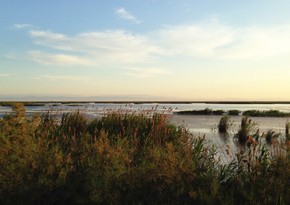 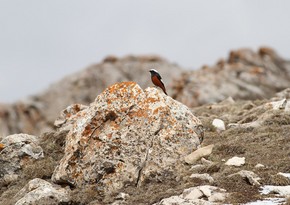 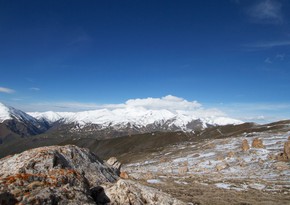 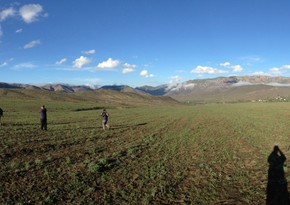 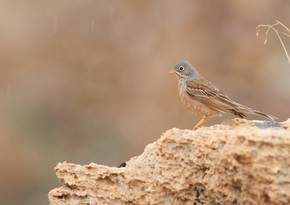 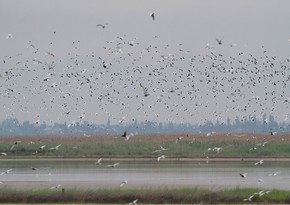