Israeli instructor holds master class on self-defense for women in Baku - PHOTO Baku. 5 December. REPORT.AZ/ An event dedicated to the week of combat against gender violence has been held at the Sport Academy in Baku.
507 Baku. 5 December. REPORT.AZ/ An event dedicated to the week of combat against gender violence has been held at the Sport Academy in Baku.

According to Report, the event was attended by Azerbaijan's Minister of Sport , chairperson of the State Committee for Family, Women and Children Affairs Hijran Huseynova, as well as Israel's chargé d'affaires in Azerbaijan Avital Rosenberg.

The event participants noted that today it is extremely important to ensure equal rights of women and men and to reduce the level of probability of violence against women. In this regard, the sport is both a factor of women's socialization and an element of self-defense.

Speaking before the event participants, Minister of Youth and Sport Azad Rahimov noted that Azerbaijan pays special attention to this issue, particularly in sport. Thus, the ministry attaches special importance to the balance of male and female athletes.

According to Rosenberg, though Azerbaijan is a safe country, women's ability to defend themselves give them more opportunities to defend their rights. She also informed the guests about the Israeli martial art Krav Maga, a system of self-defense especially popular with women and children in more than 100 countries.

Then the instructor of the Krav Maga federation Lilach Sheeff held a master class for the students of the Sport Academy, demonstrating basic self-defense techniques. 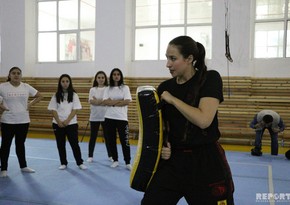