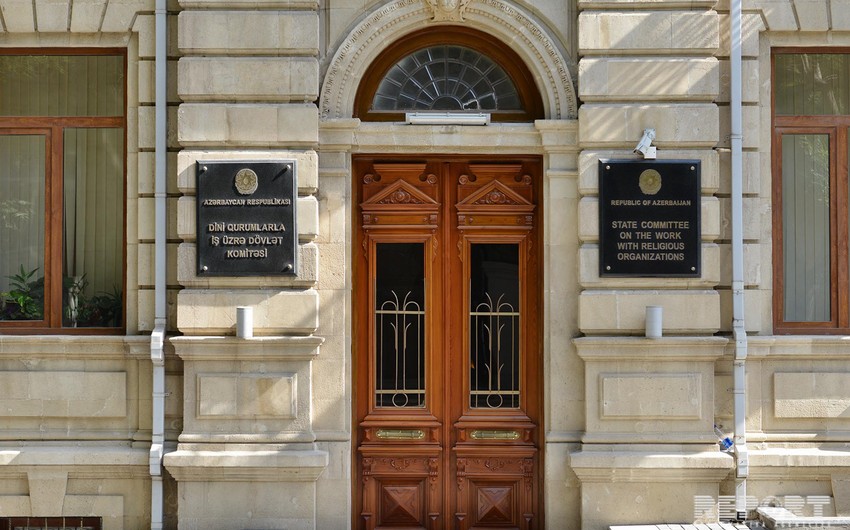 The State Committee of the Republic of Azerbaijan for the Work with Religious Organizations has released a statement on the Factsheet of the United States Commission on International Religious Freedom (USCIRF) on Destruction of Cemeteries dated September 1, 2021, Report informs.

The statement reads: "Recently, the USCIRF has released a Factsheet on the Destruction of Cemeteries. Unfortunately, the factsheet includes allegations, which do not reflect the real situation, refer to false information spread by Armenians, and make false allegations against the background of the real attitude of the Azerbaijani side to historical and religious monuments, including tombs. Despite the fact that the factsheet covers the period after 2018, the section about Azerbaijan repeats the "claims on Nakhchivan and Baku" of the early 2000s, does not draw attention to the Armenian vandalism against the Azerbaijani cemeteries. Although the document has a separate subheading entitled "Jewish cemeteries," there were no acts of vandalism against Holocaust memorial and Jewish cemetery in Armenia in 2020 and 2021."

We note that no cemetery has been destroyed during Azerbaijan's independence. Even during the 44-day war, the Azerbaijani Armed Forces did not attack the enemy civilian objects and religious buildings. Foreign journalists have repeatedly confirmed this fact.

It is strange that though Human Rights Watch confirmed the destruction of graves and other places belonging to Azerbaijanis, the deliberate shooting of a cemetery by Armenian forces during a funeral in the Tartar district during the 44-day war, killing four people and injuring four others, this information is listed under the subheading "Azerbaijan." All these facts and the absence of the subheading "Armenia" in the factsheet show how the material has pro-Armenian and biased nature.

Unfortunately, the document does not mention the facts that Armenia carried out ethnic cleansing and genocide in the UN-recognized territories of Azerbaijan occupied for almost 30 years, Armenianized Azerbaijani toponyms, destroyed more than 60 existing mosques and 200 shrines along with hundreds of historical and cultural monuments, insulted religious values by keeping animals in incomplete mosques, as well as falsified the Christian temples belonging to the Caucasian Albanian cultural heritage and the Orthodox Church.

It is quite apparent that during the occupation, Azerbaijani citizens were deprived of visiting the graves of their relatives, more than 900 cemeteries were either completely destroyed, or bodies were removed, insulted, and gravestones were looted.

With these crimes, Armenians grossly violated the International Covenant on Civil and Political Rights, the 1954 Hague Convention for the Protection of Cultural Property in the Event of Armed Conflict, the 1992 European Convention for the Safeguarding of the Archaeological Heritage, the 1972 UNESCO Convention Concerning the Protection of the World Cultural and Natural Heritage, and other requirements of international norms and standards.

Note that along with representatives of the diplomatic corps in our country, international organizations such as ICESCO, the International Organization of Turkic Culture (TURKSOY), the Cooperation Council of Turkic Speaking States (CCTS), the Turkic Culture and Heritage Foundation, the foreign journalists carried out missions in the liberated areas, visited the cemetery in the Jabrayil district, which is an example of acts of vandalism committed by the enemy against the cemeteries, and called on the world community to condemn the Armenian atrocities they witnessed.

After the end of the military operation, President Ilham Aliyev announced that all religious monuments destroyed by the Armenian Armed Forces in the liberated territories would be restored. The recovery process has been started based on the "Great Return" program. Along with government agencies, the Heydar Aliyev Foundation is closely involved in the restoration process, and restoration projects are currently being successfully implemented.

In conclusion, we deeply regret the biased information and reiterate that the USCIRF, which is responsible for analyzing and assessing the state of freedom of conscience in the World, has included some issues in the Report without investigation. The State Committee for Work with Religious Organizations once again invited the USCIRF and other relevant bodies to cooperate in order to prepare more objective and accurate reports in this area in the future."