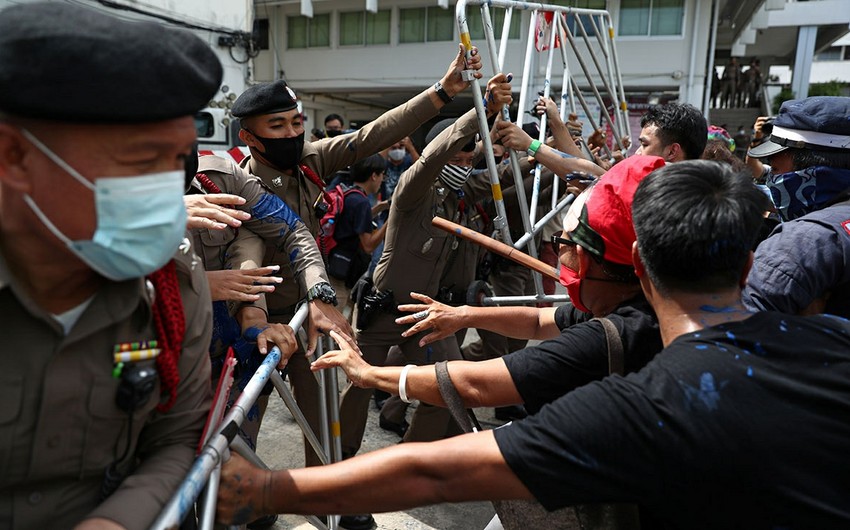 A least 33 people, including 23 policemen and ten anti-government protesters, were injured in clashes in front of the 1st Infantry Regiment barracks on Vibhavadi Rangsit Sunday night, according to the Erawan emergency center, Report informs, citing foreign media.

A police officer reportedly died of heart failure while on duty at the scene after being rushed to Rajvithee Hospital.

Police used rubber bullets, tear-gas, and high-pressure water jets to break up hundreds of protesters after they refused to disperse and started hurling projectiles at them.

Deputy police spokesman Pol Col Krissana Pattanacharoen said police had to take action against the protesters who ignored their repeated orders to end the demonstration and tried to break the barriers in front of the 1st Infantry Regiment, King’s Guards, which also houses the residence of Prime Minister Prayut Chan-o-cha.

The Erawan center reported that all the injured policemen and protesters were sent to various hospitals.

It was the most violent anti-Prayut demonstration in recent weeks. Hundreds of protesters, demonstrating under the banner REDEM (Restart Democracy) as part of the so-called Free Youths movement, began rallying at the Victory Monument in the afternoon before marching the army unit.