Azerbaijan, Iran moot issues of military-technical cooperation Minister of Defense stressing the important role of the meetings of the heads of state in the development of Azerbaijani-Iranian relations noted that cooperation in the military field is also developing successfully.
128 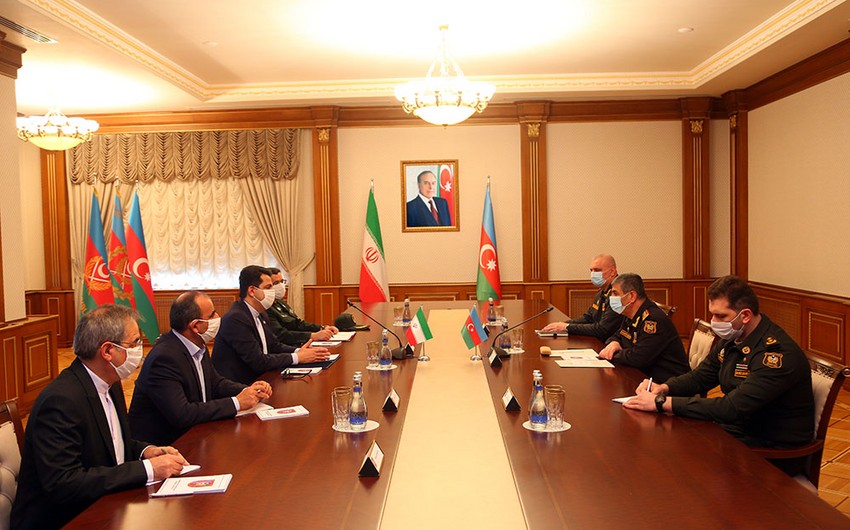 On January 14, the Minister of Defense of Azerbaijan, Colonel General Zakir Hasanov has met with the newly appointed Ambassador Extraordinary and Plenipotentiary of the Islamic Republic of Iran, Seyyed Abbas Mousavi.

Minister of Defense congratulated the Ambassador on the beginning of diplomatic activity in our country and wished him success in expanding cooperation between Azerbaijan and Iran.

The Minister of Defense thanked the Ambassador for Iran's support of Azerbaijan's position during the Patriotic War and asked to convey his greetings to Lieutenant General Mohammad Hossein Bagheri, Chief of the General Staff of the Armed Forces of the Islamic Republic of Iran, Major General Amir Khatami, Minister of Defense and Armed Forces Logistics of the Islamic Republic of Iran.

Minister of Defense stressing the important role of the meetings of the heads of state in the development of Azerbaijani-Iranian relations noted that cooperation in the military field is also developing successfully.

In his turn, the diplomat, on behalf of his country, congratulated the people and the state of Azerbaijan on the victory in the Patriotic War and wished Allah's mercy to the souls of all servicemen and civilians who died as Shehid, and healing to the wounded.

S. A. Mousavi expressed satisfaction with the beginning of activities in a friendly Azerbaijan as an Ambassador and stressed that he would make every effort to develop relations between the countries, particularly cooperation in the military sphere. The Ambassador noted that military cooperation between the two countries is an important issue in ensuring regional security.

The sides exchanged views on expanding cooperation in the military field and organizing mutual visits of the two countries' military representatives.

The meeting discussed the current state of military cooperation between Azerbaijan and Iran, the prospects for the development of relations in the military-technical, military-educational spheres, and the field of military medicine and regional issues.