Commander of NATO Special Operations Headquarters arrives in Azerbaijan Report informs citing the press service of the Ministry of Defense of the Republic of Azerbaijan. Chief of the General Staff speaking about the 25-year sustainable cooperation between Azerbaijan and the North Atlantic Alliance, noted the development of these relations, the activities of the Azerbaijan Army in various programs and the contribution made by our country to the NATO-led Resolute Support Mission in Afghanistan.

Touching upon the military-political situation in the region, Colonel General N. Sadikov stressed the importance of resolving the Armenia-Azerbaijan Nagorno-Karabakh conflict within the territorial integrity of Azerbaijan and on the basis of the norms of international law.

Vice Admiral C. Kilrain expressing satisfaction with his first visit to Azerbaijan, especially emphasized that Azerbaijan is a reliable partner of Alliance and highly appreciated the participation of our country in the fight against terrorism, the significant contribution in providing airspace to cargo transportation for peacekeeping operations and the high level of professionalism of Azerbaijani peacekeepers in Afghanistan.

During the meeting, the sides exchanged views on the development of further cooperation between the Special Forces of Azerbaijan and NATO, and other issues of mutual interest. 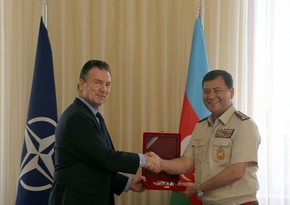