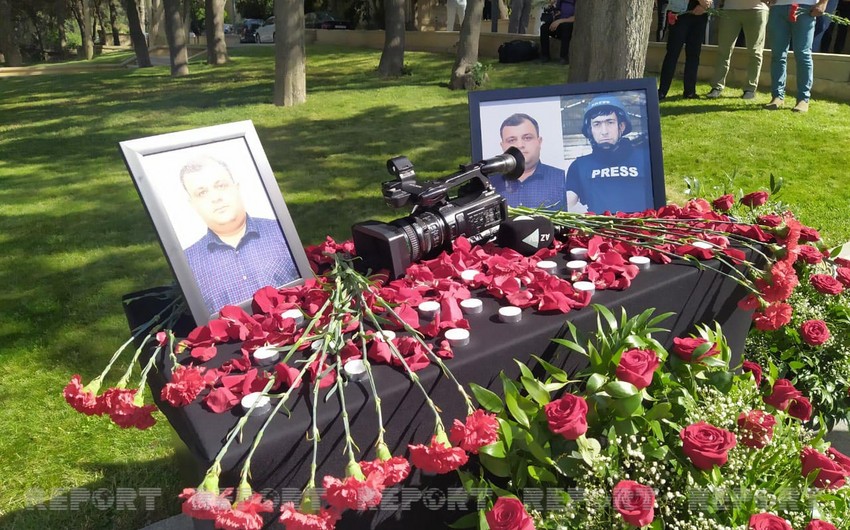 Several Ukrainian media outlets and journalists made appeals related to the death of Azerbaijani journalists in the Kalbajar region by a landmine planted by Armenia.

In a letter of appeal to the Report's Eastern Europe bureau, Ukrainian journalists expressed regret over the deaths of their Azerbaijani colleagues in the line of duty. The letter mentions UN Security Council Resolution 2365, which contains a commitment on landmines to member states in 2017, and states that Armenia has violated this obligation. Ukrainian journalists called on Armenia to take immediate responsibility for this commitment.

"We state that there are problems with the resettlement of Azerbaijani civilians who liberated their lands after 30 years of occupation. These are the complete destruction of Azerbaijani homes in the area, the destruction of forests, the destruction of mosques, and others. Unfortunately, at the same time, a large number of mines were set in the liberated areas. Azerbaijani President Ilham Aliyev has regularly stated that despite repeated appeals and demands after the end of the conflict, Armenia does not provide a map of mined areas in violation of the agreement. We call on Armenia to fulfill its obligations," the letter reads.

Ukrainian media joined the call around the editorial office of the United Diaspora of Azerbaijanis in Ukraine newspaper Oqni Azerbaydjana. These are Dnepr vecerniy, Kurier socio-political newspaper, Za virciznu editorial board, Anna Kosinenko, a member of the Union of Journalists of Ukraine, and other independent journalists.

Note that at about 11.00 am on June 4, 2021, a Kamaz passenger car with film crews dispatched to the de-occupied Kalbajar region for their official duties was hit by an anti-tank mine while driving to the Susuzlug village. Three people, including Siraj Abishov (cameraman of AzTV), Maharram Ibrahimov (employee of AzerTaj news agency), Arif Aliyev (deputy representative of the head of the Executive Power in the Susuzlug village), died, and four others were hospitalized with various injuries.