The avenged Balligaya tragedy Today is the next anniversary of the Balligaya massacre committed by Armenian terrorist groups and going down in history as a bloody and ruthless crime. 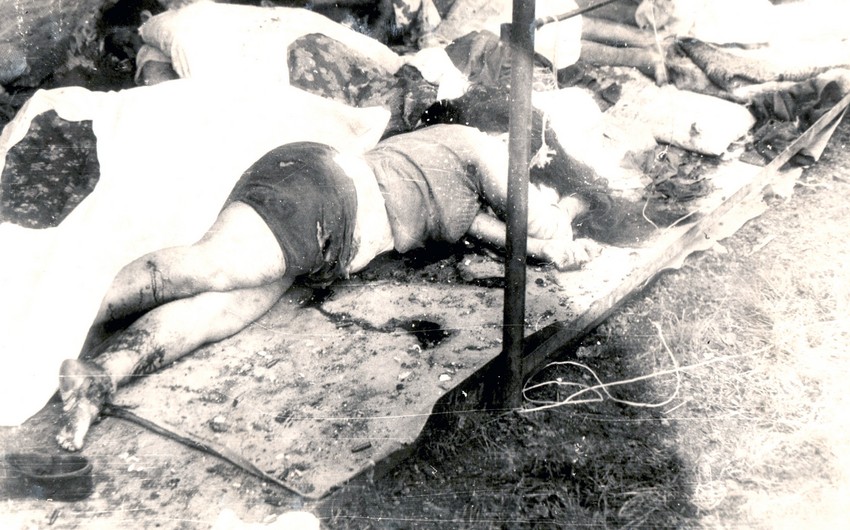 Today is the next anniversary of the Balligaya massacre committed by Armenian terrorist groups and gone down in history as a bloody and ruthless crime.

According to Report, 29 years have passed since the murder of peaceful Azerbaijanis committed by the Armenian armed forces.

The tragedy is remembered in history as the Balligaya massacre and took place on August 28, 1992, at around 5 a.m. in the village of Balligaya, Goranboy district.

As a result of the massacre, 24 Azerbaijani civilians were brutally killed, including six minors, a 6-month-old baby, and a 93-year-old woman. Most of the victims were children, women, and the elderly, and some of their bodies were burned. In addition, three minors lost both parents.

The Balligaya massacre is one of a series of massacres committed by the Armenian armed forces in Garadagli village of Khojavend, Khojaly city, Aghdaban village of Kalbajar in order to destroy the Azerbaijani population of Karabakh compactly.

After the occupation of Lachin in the summer of 1992, the local population, who were deprived of their homes, settled in different parts of Azerbaijan. Six close-knit families resided in the Balligaya area, which is suitable for livestock. Residents of the Lachin district, who lived in a tent in the village of Balligaya in August, also came here to continue their livestock activities.

However, they were brutally murdered on August 28. A sabotage group of 10-12 people from the Armenian Army entered the area and attacked innocent people with weapons. As a result, 24 unarmed civilians were brutally killed, and nine were seriously injured. All dead and seriously injured were civilians, shepherds, and their families.

The tragedies in Balligaya, Garadaghli, Khojaly, and Aghdaban show once again that Armenians have historically been hostile to peaceful Azerbaijanis. These massacres committed against Azerbaijanis are engraved in the bloody memory of Azerbaijani history.

During the counter-offensive operations since September 27, 2020, Azerbaijani Army took revenge for all the massacres committed by Armenians against Azerbaijanis. Under the leadership of Glorious Supreme Commander-in-Chief, President Ilham Aliyev, the brave Azerbaijani Army could destroy the enemy on the battlefield and took revenge. However, the Armenian armed forces continued their war crimes against the civilian population, even during the days of the Patriotic War. The enemy could not withstand the Azerbaijani soldier, so they fled the battlefield and bombed the cities and regions located on the front line and close to the front line at that time. The enemy's bombardment of the cities of Ganja and Barda with ballistic missiles killed several innocent people, minors, and women. Many people, including children and women, were killed due to shelling and rocket fire on civilians and infrastructure in Mingachevir, Yevlakh, Naftalan, Goranboy, Tartar, Aghdam, Aghjabadi, and other cities and regions.

All this is the main goal of the ideology of the Armenians - the Armenian armed forces, who are hostile to the peaceful Azerbaijanis.

But both their ideology and their invincible armies, which they tried to convince themselves by building on mythology, were destroyed thanks to the unity of the Azerbaijani people and the courage of the Azerbaijani Army, closely united around the resolute Supreme Commander-in-Chief. Thus, as a result of measures taken by the Azerbaijani Army, our lands, which have been under occupation for many years, have been liberated. Thus, historical justice was restored, and victory was won. Armenian militants, who committed massacres and genocide against Azerbaijanis, and their debris were destroyed on the battlefield. Despite the success, the Azerbaijani people have never forgotten the bloodshed perpetrated by Armenians.

President, Supreme Commander-in-Chief Ilham Aliyev has repeatedly said that none of these massacres against the Azerbaijani people will be forgotten. Therefore Armenia will be condemned to legal action.

We respectfully commemorate the innocent civilians killed in the Balligaya tragedy. The following list includes their names: