Ilham Aliyev: Crown of our victory is the Shusha operation 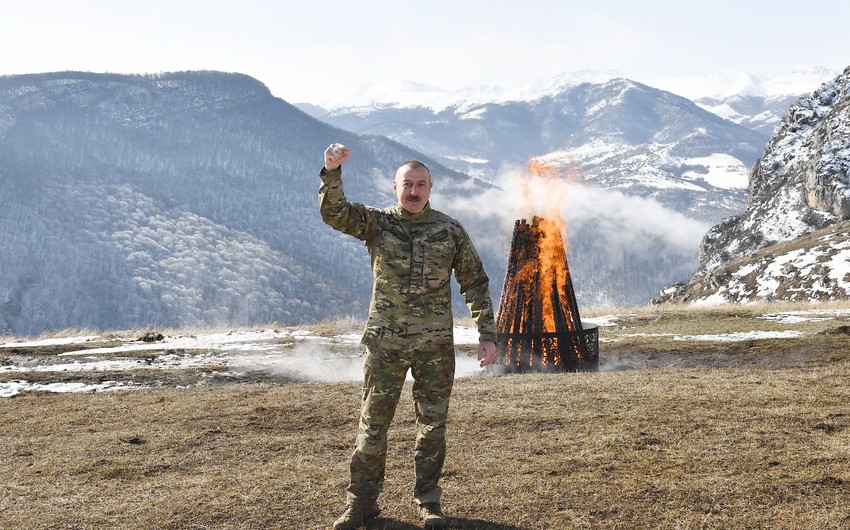 “If we had not managed to break through the defense line on the very first day, it would have been more difficult for us – both from the point of view of the progress of hostilities and from the point of view of the morale of the armed forces. This played a very important role. I think that the second Karabakh war is very indicative for many precisely in terms of the constituent factors that led to success,” Azerbaijani President Ilham Aliyev said in an interview to editor-in-chief of Russian influential “Natsionalnaya oborona” magazine, well-known military expert Igor Korotchenko, Report informs referring to .

“I would also note the importance of the Hadrut operation because they were not expecting us there. The Armenian side did not expect us to go this way, it was unexpected for them. And several days after the capture of Hadrut, the Armenian side announced that they still had Hadrut although there were already our people at all heights in Hadrut. The Armenian leadership had a somewhat amateurish understanding of whether the city was taken or not. Having taken all the dominant heights around Hadrut, the fate of this city was essentially decided. And it was only a matter of time when we will physically enter it – with minimal losses again. And only when we showed a soldier hoisting a flag on the local administration building and reporting to me on the capture of Hadrut did the Armenian side run out of further arguments and stop composing fables,” Ilham Aliyev said.

“Prior to Hadrut, we liberated the city of Jabrayil in early October. This was also important from a symbolic point of view because this was the first city to be liberated. We had liberated villages and settlements before that. And of course, the liberation of the city of Fuzuli on 17 October was an important stage because it is a large city – the second largest in the Karabakh region after Aghdam in terms of the population. I would also note the capture of the settlements of Soltanli and Amirvarli, of course. Why? Because there was a very powerful fortified area there. For several days, we had to conduct a very intense military operation there to break the enemy's resistance. In some directions the enemy gave up their weapons and ran away – they themselves admitted that they had 10,000 deserters. In some settlements they stood to the end. We must recognize this. I think that no-one should have any doubt that the Armenian side showed steadfastness in some operations. No-one should underestimate the enemy and belittle or take away from it. This is why the liberation of Soltanli and Amirvarli – this was the road to Zangilan – was very important from the point of view of the further course of events,” he added.

“As for the capture of the city of Zangilan, they were already running away from there because there were no resources to resist. In addition, even during the hostilities of the first period they made a mistake by trying to counterattack, which was completely silly from a military perspective. Instead of strengthening their defenses, they threw their forces into a counterattack and were completely destroyed. And, of course, the further operation – I would note the liberation of Gubadli and the access to the south of Lachin district, the liberation of the villages of Lachin district – Gulabird and others, which allowed us the opportunity to control the Lachin corridor. In fact, it was already under our control. And, of course, the crown of our victory is the Shusha operation. Anyone going to Shusha along Victory Road now can see where we accessed the city. It was a mobilization of incredible physical and moral effort. Moreover, this involved long days in the forest, in off-road conditions and with light weapons, moving forward tirelessly and then liberating Shusha – this is an unparalleled feat, this is heroism. Of course, the capture of Shusha broke the enemy’s back, and the enemy practically surrendered after that,” the president said.