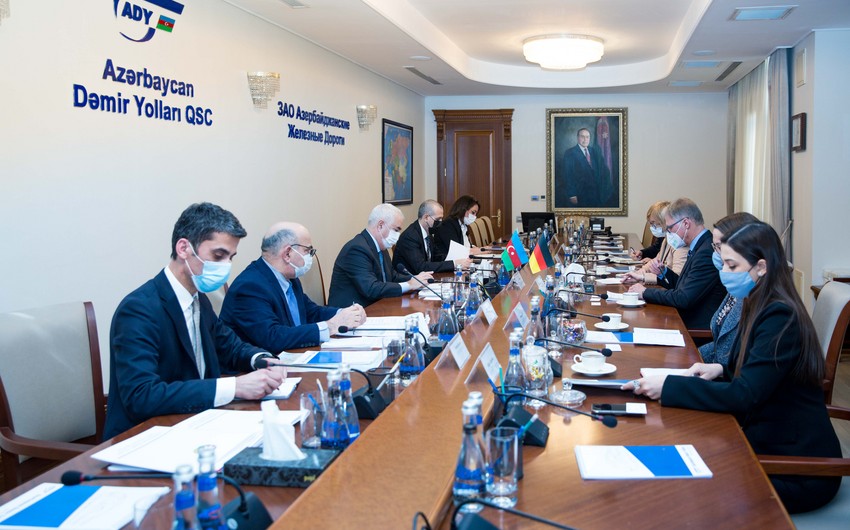 A meeting with German Ambassador to Azerbaijan Wolfgang Manig was held at the Azerbaijan Railways CJSC, Report informs referring to the company.

Chairman of the Azerbaijan Railways Javid Gurbanov informed the guest about the recent reforms carried out in the country’s railways, the work done as part of establishing international transport corridors and promising areas for further activities.

The meeting participants discussed the role of the North-South International Transport Corridor, its development strategy, passenger and freight traffic along the ITC, as well as cooperation with the participating countries in this direction. It was noted that the corridor will expand economic ties and play an important role in the development of other countries in the region, which, carrying out export-import operations along this route, are increasing their trade turnover.

Gurbanov noted that a tender is underway for updating the contact network of railways, designing and reconstructing communication and signaling systems, as well as energy facilities. It was emphasized that a German company is also participating in the tender.

It was also reported at the meeting that the Azerbaijan Railways CJSC cooperates with companies that have achieved international recognition in such countries as Germany, Switzerland and Austria.

In turn, Ambassador Wolfgang Manig spoke in detail about the history of the Deutsche Bahn AG (German Railways), the stages of its development. He noted the interest both in expanding bilateral relations and German companies’ investment in railway projects in Azerbaijan.

Prospects and possible areas of cooperation were discussed at the meeting.