AZAL presents new destinations to Saudi Arabia Azerbaijan’s national air carrier held a presentation in Riyadh entitled “Azerbaijan through the eyes of a falcon”, at which new routes of Azerbaijan Airlines to a number of cities in Saudi Arabia were presented, Report informs. 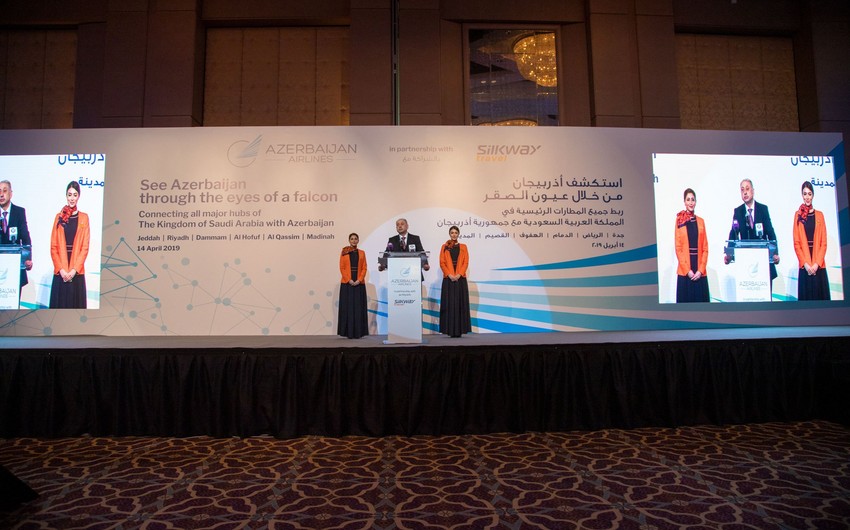 Azerbaijan’s national air carrier held a presentation in Riyadh entitled “Azerbaijan through the eyes of a falcon”, at which new routes of to a number of cities in Saudi Arabia were presented, Report informs.

The event was attended by a delegation of AZAL, headed by Vice-President Eldar Hajiyev, representatives of the two countries’ governments, the diplomatic corps, mass media, and others.

Modern tourism opportunities for organizing recreation and leisure in Azerbaijan, including beach, ski, medical and historical tourism were presented to the wide audience.

The event participants were provided with information about Azerbaijan’s civil aviation infrastructure. The guests were also able to taste the culinary masterpieces of our country.

Speaking at the event, AZAL Vice President Eldar Hajiyev noted that thanks to Azerbaijani President ’s constant attention and support, civil aviation of our country achieved great successes. Last year, Azerbaijan Airlines was confirmed the prestigious 4-Star airline status and according to the British Skytrax Agency, the Airline was named the best regional airline in Central Asia and India.

“Our peoples have a common religious and cultural heritage, common spiritual values. The opening of new destinations, as well as the simplified visa regime will significantly increase the tourist flow and business relations between the two countries,” Eldar Hajiyev said.

It should be noted that AZAL opens many new regular and charter flights to the Arab countries, six of which to the Saudi Arabian cities of Riyadh, Dammam, Jeddah, Madinah, Buraydah (Al-Qassim) and Al-Hofuf.

The flights to Saudi Arabia will be carried out with modern Airbus A319/320 and E190 aircraft according to the following schedule: