Ilham Aliyev: $ 2.7 bln planned to invest in Sumgayit Chemical Industrial Park The number of carpet factories will reach 30 in Azerbaijan
2773 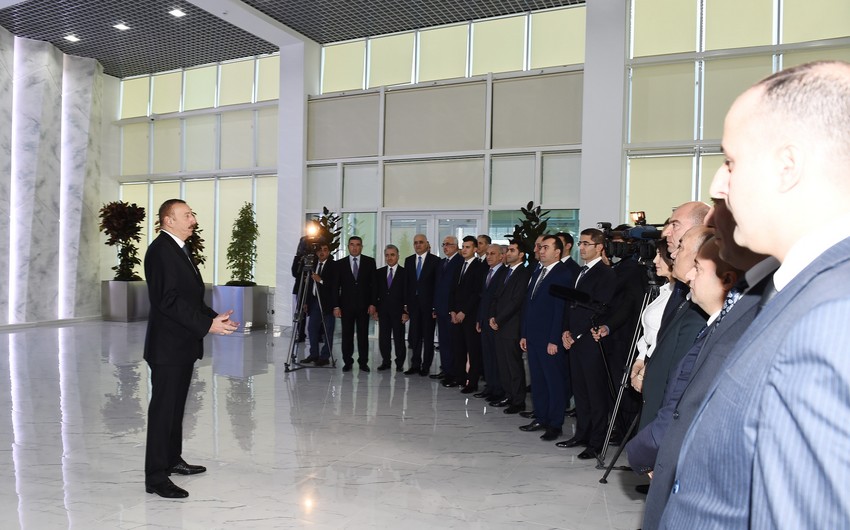 Baku. 15 December. REPORT.AZ/ Currently, Sumgayit Chemical Industrial Park has 15 residents. Taking into account all the projects under construction, $ 2.7 bln planned to invest there in total.

Report informs, President Ilham Aliyev said at the groundbreaking and opening ceremonies of the new enterprises in the Park.

The head of state also said that Azerbaijan pays great attention to carpet weaving and 10 carpet factories have been opened in a short time: "10 factories will be launched next year and it is planned to establish thirty carpet factories".

Speaking about cigarette factory laid in Sumgayit Chemical Industrial Park, I. Aliyev said that the factory will meet at least 50% of the domestic demand at the initial stage: "I am sure that in the future we will meet domestic demand by 100% and at the same time export to foreign markets".

Also, according to the head of state, if the other residents of the Park are taken into consideration, it can be considered as a major industrial center in the world: "At present, SOCAR polymer and carbamide plant are under construction. Total investment volume of the two project is $ 1.7 bln. This will allow us to provide domestic production, local raw materials, and create great export opportunities".

The President also noted that currently, Sumgayit Chemical Industrial Park employs more than 8,000 people and this figure will increase in the future.