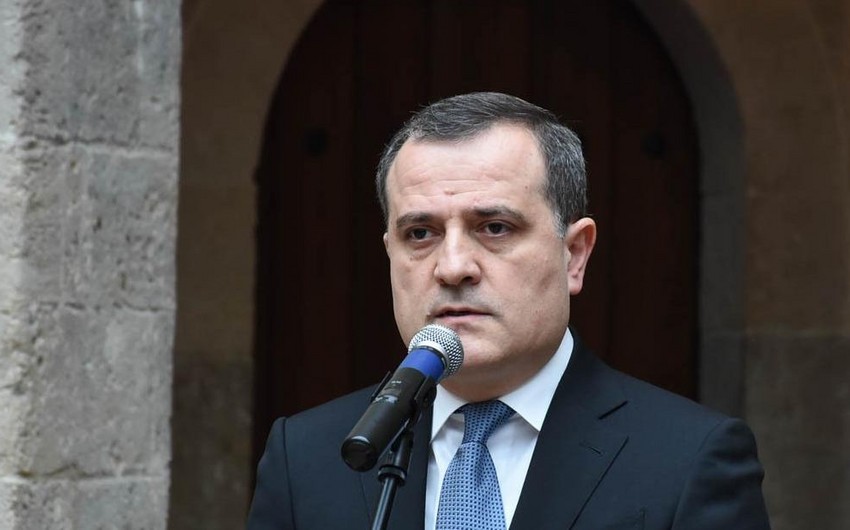 Minister of Foreign Affairs of the Republic of Azerbaijan Ceyhun Bayramov, has made a speech at the webinar on “Leveraging the Effects of the Pandemic Towards Regional Cooperation in Asia”

Report informs citing the Ministry of Foreign Affairs of Azerbaijan, the statement reads:

Before we start our discussions, I would like to reiterate my sincere condolences to the esteemed Turkish side on the occasion of the death of Turkish soldiers in the road accident, which took place in the Mersin province yesterday. Our prayers and sympathies are with their families. And we wish the soonest recovery to those injured in the accident.

Please accept my appreciation for the kind invitation extended by my esteemed colleague, Minister Çavuşoğlu. Thank the Antalya Diplomacy Forum and Rajaratnam School of International Studies for organizing this webinar. I believe that it will yield fruitful discussions on leveraging the effects of a pandemic. This event will also be a good opportunity to provide an insight into how the Republic of Azerbaijan is tackling the COVID-19 pandemic since its emergence.

The COVID-19 pandemic brought a number of unparalleled challenges and disruptions that required a worldwide effort to protect public health. Countries have taken reinforcement measures on containment, prevention, and response to the pandemic's spread under the leadership of their respective heads of state and government.

Azerbaijan plays an active role in the fight against the COVID-19 pandemic at both domestic and multilateral levels. So far Azerbaijan provided voluntary financial assistance to the World Health Organization. These funds are intended for those most in need of assistance from the regional groups of Africa, Latin America, and Asia. Azerbaijan also provided assistance in the form of medical supplies and equipment to individual countries.

I would also like to mention the steps taken by Azerbaijan at the domestic level. In February, an operational headquarters was created under the Cabinet of Ministers to prevent the spread of new coronavirus infection in the territory of the Republic of Azerbaijan.
Since early March, education in all institutions was suspended. All mass events were postponed or canceled. Since the end of March, a quarantine regime has been in effect. It includes a series of measures of social isolation and restrictions. The evacuation of our citizens from abroad has been one of the priorities during the pandemic period.

Taking into account the global uncertainty caused by the pandemic as well as its repercussions, the Member States and Hungary, as the observer state, have sought a unified action in overcoming the challenges and stressed cooperation in the framework of the Turkic Council.
The Extraordinary Summit of the Turkic Council was held through a videoconference on April 10, 2020, on the theme of "Solidarity and Cooperation in the fight against COVID-19 pandemic" with the initiative of the President of the Republic of Azerbaijan, H.E. Mr. Ilham Aliyev. I should stress that the Summit is the first to be held on the level of the Heads of State in tackling the pandemic.
During the Extraordinary Summit, the Heads of State emphasized their determination to expand the cooperation in the fight against the COVID-19 pandemic, as well as demonstrating a firm stance in seeking solidarity for the sake of common well-being, exchange of experience and uniting their efforts by fully mobilizing scientific, innovative, technological and medical potential.

The Heads of State of the Turkic Council agreed to establish a consultation and cooperation mechanism among their respective national crisis centers, which includes the close interaction among the ministries of health of the Member States, to share best practices, assisting each other on substantive aspects regarding the COVID-19 pandemic.

Following the instructions of the Heads of States during the Extraordinary Summit Azerbaijan - as the Chairman-in-Office of the Turkic Council - successfully organized the videoconferences of the Ministers of Health, Ministers of Transport, Ministers of Economy and Heads of Customs Administrations, Heads of the Migration Services, Health Coordination Committee, Ministers in Charge of Tourism and Health Scientific Group. These conferences proved to be effective consultation mechanisms on finding the remedies, mobilizing efforts, exploring the socio-economic effects of the COVID-19 pandemic, and the diagnosis and treatment of dangerous infections.
I believe the continuation of Azerbaijan's efforts on the multinational level is worthy of mention. One such instance is the Summit of the Non-Aligned Movement in the format of Contact Group, which was held on May 4, 2020, with the initiative of the President of the Republic of Azerbaijan, H.E. Mr. Ilham Aliyev.
President Aliyev, in his capacity as the Chair of the Non-Aligned Movement, proposed to convene a special session of the United Nations General Assembly in response to COVID-19, via videoconference, at the level of the Heads of State and Government, which received absolute majority support from the Member States.
I should underline that this proposal is also significant. It highlights the central position of the United Nations system, as well as the role of the General Assembly, as the chief deliberative, policymaking and representative organ in mobilizing urgent actions to fight the pandemic and address its socio-economic impacts effectively.
Excellencies,

Azerbaijan continues to suffer from Armenia's aggression, as a result of which approximately 20 percent of the Azerbaijani territories are under occupation. More than a million Azerbaijanis were forced to leave their historical lands and became refugees or internally displaced persons. The four U.N. Security Council resolutions demanded an immediate, unconditional, and full withdrawal of Armenian armed forces from Azerbaijan's occupied territories. However, Armenia continues to disregard these resolutions and other documents of international organizations demanding to cease its occupation and aggression.

While the entire world is mobilized to fight COVID-19 pandemic, Armenia resorts to provocation and diversion attempts to escalate tension. On July 12, 2020, Armenia's armed forces flagrantly violated the ceasefire and used artillery to fire on the positions of Azerbaijan's armed forces in the Tovuz district, along the state border between Armenia and Azerbaijan. As a result of the attacks, 12 service members, including one major general, of the Azerbaijani armed forces and 1 civilian, have been martyred.
Such military recklessness on the part of Armenia pursues an objective of undermining the peace talks and continuing the occupation and aggression against Azerbaijan. By doing so, Armenia's leadership aims to escalate the situation, against the backdrop of socio-economic problems deteriorated further by the widespread of COVID-19 pandemic in Armenia, caused by its incompetent performance, and distract attention from the domestic issues in the country.

The international response toward the provocation has also been overwhelming. Leading global organizations such as the Cooperation Council of Turkic Speaking States and Organization of Islamic Cooperation released statements. At the same time, the Coordinating Bureau of the Non-Aligned Movement, with the support of its 120 Member States, adopted a communique strongly condemning the attack by the armed forces of Armenia. We want to express our immense gratitude to brotherly Turkey for demonstrating resolute solidarity in this time of need.