President: "We reject all accusations against Azerbaijan over bringing Israel to liberated lands"

President: "We reject all accusations against Azerbaijan over bringing Israel to liberated lands" President Ilham Aliyev has commented on the recent behavior of Iranian officials towards Azerbaijan, President of Azerbaijan Ilham Aliyev said in an interview with Italian La Repubblica newspaper on Oct. 7, Report informs. 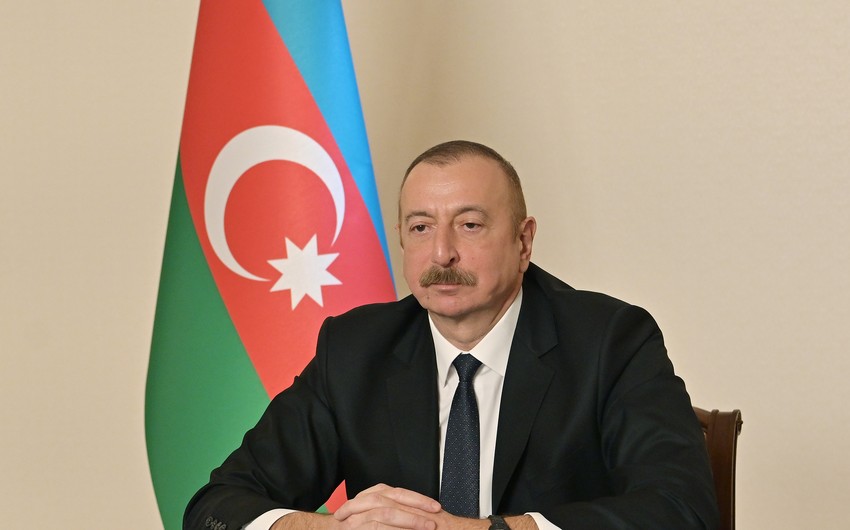 President of Azerbaijan Ilham Aliyev has commented on the recent behavior of Iranian officials towards Azerbaijan in an interview with Italian La Repubblica newspaper on October 7, informs.

-What’s up with Tehran, Iran? What was going on with Iran?

-You mean our bilateral relations or in general?

-Yes. I read about you had some frictions, right? You had some problems. How are you going to with that? Because I understand that they are not very happy that you are close to Israel. Is it right?

-This is a pretext, you know. The reasons for what it is happening is not because of our relations with some other country, because our foreign policy is very open, transparent, stable and as I said independent. No other country can or should try to influence Azerbaijan’s decisions. Decisions are made here in Baku, by me, based on the national interests of Azerbaijan. Whoever tried to use artificial pretext and to blame Azerbaijan for kind of relations with some other countries, failed. This is not the right path. It will lead to deadlock.

The reasons for what it happened, is very simple. Azerbaijan wants respect to its borders. After liberation of Karabakh, we came to our borders with Armenia. So, we came to our borders, and we sit on our borders. And it happened that the road between some Armenian cities is crossing Azerbaijani territory. But then we started to see that this road is used for illegal cargo transportation to Karabakh, to our territory. This is not acceptable. We demand respect to our borders. We do not violate any other country’s borders illegally. So, our message was very simple-stop it. We made a very friendly communication, not public communication, but friendly communication to stop it, because it is not right. We control that road. We see. There is no way to cheat, no way to say that it doesn’t happen. Unfortunately, this warning was not adequately responded, then, we had to take the second step. We made a diplomatic nota. We invited the ambassador and made it public, in order to stop it. But actually it became even worse. The number of trucks from Iran to Karabakh increased and we considered it as an assault, as a deliberate disrespect. So, then we took other measures which is absolutely legitimate. It created big turbulence and unnecessary movements in the neighboring country-inappropriate statements, threats, military trainings on our border. Because it was strange that first it was said that these military trainings are planned, but then it was said that they were in order to demonstrate us something. No one can impose its will on us. We want to have friendly relation with all the countries, in the first place, with our neighbors. On many occasions, I, talking about foreign policy priorities of Azerbaijan, and they are all published, said that our priority is the relations with the neighboring countries. We, with Iran and during the previous Iranian government with which we worked for eight years, managed to elevate our relations to actually highest possible level. I had more than ten meetings with my counterpart Mr. Hassan Rouhani. All of them were productive. We signed many agreements and we implemented them on energy, on transportation, on cultural development, security. Our relations were actually the symbol of friendship and good neighborhood. When the new government of Iran, the new president was elected, what we’ve done? We send the big delegation to his inauguration led by head of our parliament and deputy prime minister. They delivered my message of friendship to Iranian President directly. At the same time, and the other message which was delivered particularly what I said before ‘please, pay attention to this illegal business activity in Karabakh by Iranian businessmen’. We were not in a position to accuse Iranian government. We understood that it’s some private companies who do it. But we asked to stop it. What happened in return, everybody sees. And what we have in the end. Again, nothing good. Therefore, first, we reject all the accusations about Azerbaijan bringing Israel to the liberated territories. That is absolutely nonsense. It is just a pretext aimed at the domestic audience in order to demonize Azerbaijan. Everybody can go and see that there is no life there. Everything is destroyed. Second, that we demand respect to us, the same respect which we show to others.