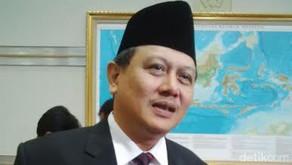 Baku. 29 January. REPORT.AZ/ Ambassador of Indonesia Prayono Atiyanto who has completed his diplomatic mission in Azerbaijan will depart from Baku on January 31.

Report was told in Embassy of Indonesia.

According to the information, together with the ambassador his deputy Reza Pahlavi will also leave.

The embassy also reported that the new ambassador will arrive in Azerbaijan next month.