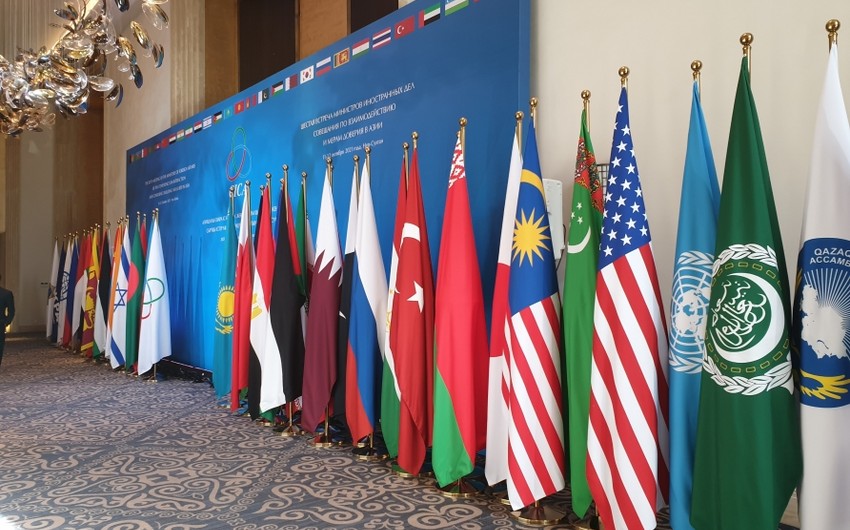 The capital of Kazakhstan, Nur-Sultan, hosted the 6th meeting of the Foreign Ministers of the Conference on Interaction and Confidence-Building Measures in Asia () on October 12.

recalled that Azerbaijan was one of the first countries to support the initiative to convene the CICA, noting the steps taken by Azerbaijan as a coordinator of the confidence-building event on the development of transport corridors within the Conference.

The Azerbaijani official talked about the restoration and reconstruction work carried out in these territories after the end of the Armenian-Azerbaijani conflict and the liberation of Azerbaijani territories from the Armenian occupation of nearly 30 years. He noted that these areas have been declared green energy zones and are being reconstructed following the smart city and smart village concepts. Mammad-Guliyev stressed the importance of involving private sector representatives from many CICA member states in these processes as a new example of cooperation between the member states.

The deputy minister noted that the Zangazur corridor has excellent potential for the post-conflict normalization process, regional peace, confidence-building, and the development of trade and transport links in the north-south and east-west directions.

Mammad-Guliyev informed the conference participants about the consequences of Armenia's mass contamination of Azerbaijani territories with mines and other explosives, Armenia's refusal to hand over accurate maps of all minefields to Azerbaijan in violation of international humanitarian law.

Recalling Azerbaijan's proposals to normalize relations with Armenia on the basis of respect to each other's sovereignty, territorial integrity, and inviolability of international borders, to sign a peace agreement after the delimitation and demarcation of borders, the deputy minister stressed that Armenis must have the political will and show constructive approach.

The chairmanship issued a statement at the end of the meeting.

The statement said mines and other explosives were obstacles to post-conflict recovery, reconstruction, and peacebuilding efforts and stressed the importance of effective mine action to ensure peace and stability after the conflict.

In this regard, the Foreign Ministers of the CICA member states call on the UN, other international organizations and individual states to assist countries in clearing the areas contaminated with mines and other explosives.

The capital of Kazakhstan, Nur-Sultan, is hosting the 6th meeting of the Foreign Ministers of the Conference on Interaction and Confidence-Building Measures in Asia (CICA).

The meeting of foreign ministers in Nur-Sultan (in a hybrid format) will focus on prospects for development in strengthening confidence-building measures in key segments of the forum.

A political declaration is expected to be adopted at the end of the meeting.

The First President of Kazakhstan- President Nursultan Nazarbayev, put forward the initiative to establish the Conference on Interaction and Confidence-Building Measures in Asia. At present, the organization has 27 permanent and eight observer members, including Azerbaijan.

Meetings of the heads of state and government of the participating countries take place at least once every four years.