Khalaf Khalafov: Confidence-building measures among parties should not undermine security of Caspian littoral states 'Caspian region is an important component of many international and regional projects'
118 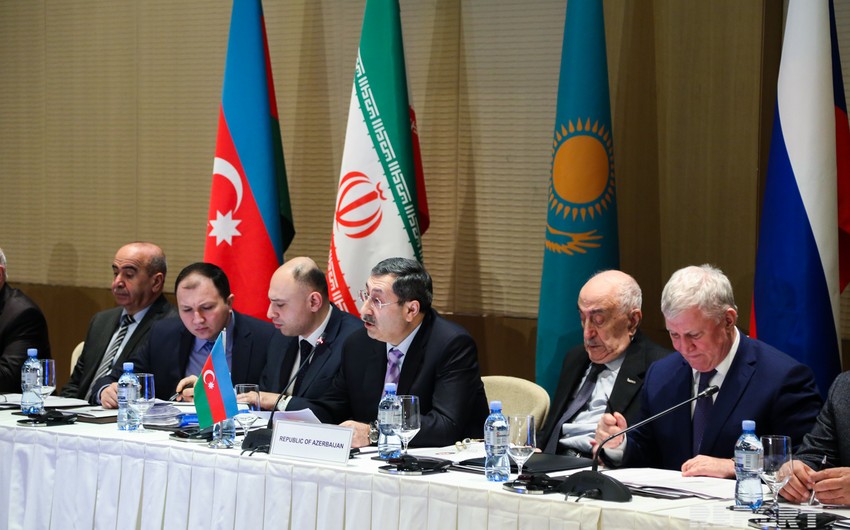 Baku. 25 January. REPORT.AZ/ "The Caspian Sea is an important component of many international and regional projects aimed at economic development, welfare of the peoples of the Caspian region countries and global energy security".

Report informs, Deputy Azerbaijani Foreign Minister Khalaf Khalafov said addressing the 48th meeting of the Ad Hoc Working Group on Convention on legal status of the Caspian Sea at the level of deputy foreign ministers of the Caspian littoral states.

Deputy Minister said that as a part of the negotiation process, significant works have been carried out for coordination of provisions of the draft convention as well as cooperation of the Caspian countries in various fields: "In addition, since 2002, four summits have been held in Ashgabat, Tehran, Baku and Astrakhan, of heads of Caspian littoral states accompanied by meetings of foreign ministers. In Baku and Astrakhan summits, heads of states reached important agreements on width of the national zone of water venues under sovereignty of the littoral states as well principles of cooperation in the Caspian Sea. Meetings at the level of heads of states and foreign ministers created favorable conditions to combine efforts, bring stands nearer and achieve significant results".

Kh.Khalafov said that entire coordination of the draft convention will allow to adopt legal status in the next summit: "This will create comprehensive legal mechanism for mutual activity and cooperation of the Caspian littoral states.

Also, Baku will host the Sixth Meeting of the Conference of the Parties to the Framework Convention for the Protection of the Marine Environment of the Caspian Sea. We are interested in expansion of cooperation among Caspian littoral states to solve environmental problems of the Caspian Sea and stress importance of agreement among the Parties on independent activity of the Secretariat of the Framework Convention".