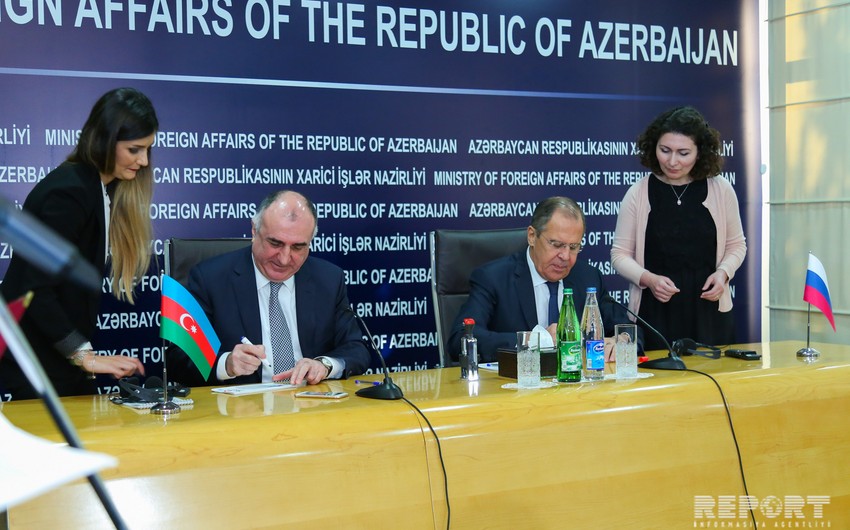 It was noted during the meeting that the 25th anniversary of the establishment of diplomatic relations between Azerbaijan and Russia is celebrated in 2017. Ministers expressed their satisfaction with the development of good neighborly, friendly and strategic partnership relations between the two countries. The political significance of the Baku Declaration on Friendship and Strategic Cooperation, dated 3 July 2008, was particularly highlighted in the development of bilateral relations.

Ministers emphasized that sincere friendship and dialogue that exist between the President of the Republic of Azerbaijan, H.E Mr Ilham Aliyev and President of the Russian Federation, H.E Mr. Vladimir Putin gives special impetus to the development of strategic partnership relations between our countries.

Furthermore, Ministers reviewed the comprehensive enhancement of bilateral relations between Azerbaijan and Russia and discussed prospects for development.

The sides discussed the settlement of Armenia-Azerbaijan Nagorno-Karabakh conflict and commended the latest developments and intensification of the negotiations.

They also noted successful cooperation between the two countries within the framework of international organizations.

The importance of the Intergovernmental Joint Commission and political consultations mechanism between the Foreign Ministries was emphasized in the advancement of cooperation between our countries.

An important role played by the Azerbaijan-Russia Inter-regional Forum since 2011, in the expansion of trade turnover and trade relations between the two countries was also highlighted. As a result of the joint efforts of the two countries, the development of economic and trade relations and the growth of trade turnover and mutual tourist flow were especially emphasized.

Development of cooperation on the basis of Azerbaijan-Russia-Iran trilateral format and the joint activities aimed at the creation of the North-South transport corridor were highly appreciated.

In the humanitarian field, discussions were held on further development and enhancement of cooperation in the spheres of culture and public affairs, science and education, information and youth policy on the basis of bilateral cooperation programs and the importance of the Baku Humanitarian Forum held under the auspices of the two countries.

The Ministers also exchanged views on the legal status of the Caspian Sea, expanding the legal framework, as well as regional and global issues.

Ceremony of sealing and exchange of the memorable envelope dedicated to the 25th anniversary of establishing diplomatic relations between Azerbaijan and Russia was also held.

Report informs, the ministers will discuss topical issues of the Azerbaijani-Russian relations, as well as regional issues, including the current situation around the Nagorno-Karabakh conflict settlement.

Later the meeting will continue in an expanded format.