Consul General of Azerbaijan: U.S. President Woodrow Wilson was impressed by the diplomats of ADR in Paris

Consul General of Azerbaijan: U.S. President Woodrow Wilson was impressed by the diplomats of ADR in Paris Baku. 11 May. REPORT.AZ/. President Wilson was so much impressed by meeting with diplomats of ADR that upon his return to the U.S. he referred to this meeting several times. Report informs , Nasimi Agayev, the Consul General of Azerbaijan in Los Angeles writes about this in his article.
210 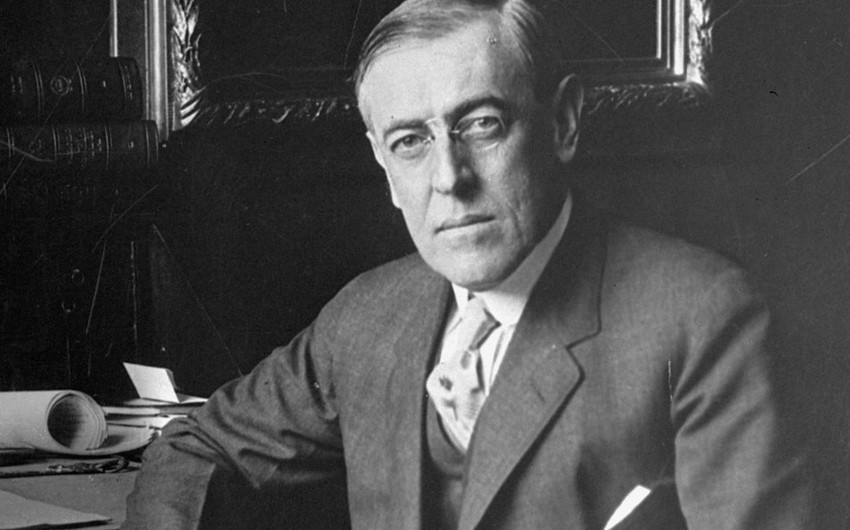 Baku. 11 May. REPORT.AZ/. President Wilson was so much impressed by meeting with diplomats of ADR that upon his return to the U.S. he referred to this meeting several times.  Report informs , Nasimi Agayev, the Consul General of Azerbaijan in Los Angeles writes about this in his article.

The Consul General recalls that this year on May 28 we will celebrate the 100th anniversary of the Azerbaijan Democratic Republic, which was the first ever secular democracy in the entire Muslim world (1918-20) and the first majority-Muslim nation to grant voting rights to women (1919).

“On May 28, 1919 the Azerbaijani delegation met with U.S. President Woodrow Wilson in Paris. President Wilson was so much impressed by meeting Azerbaijani diplomats that upon his return to the U.S. he referred to this meeting several times in his public speeches during his tour of dozens of Western and Southern U.S. states in September 2019” noted N. Aghayev.

Until now we were familiar with his well-known reference, made during his speech in San Francisco, to meeting Azerbaijani delegation. However while researching the U.S. historical sources, I came across another reference - the one that President Wilson made in his speech in Bismarck, North Dakota on Sep. 10, 1919 - even before his San Francisco presentation (Sep. 18). Here is an abridged version of what Wilson said in North Dakota:

For example, “I have told many times, but I must tell you again, of the experience that I had in Paris. Almost every day of the week that I was not imperatively engaged otherwise I was receiving delegations. Delegations from where? Not merely groups of men from France and other nearby regions, but groups of men from all over the world—as I have several times admitted, from some parts of the world that I never heard the names of before. I do not think they were in geography when I was at school. If they were, I had forgotten them. Did you ever hear of Azerbaijan, for example? A very dignified group of fine-looking men came in from Azerbaijan. I did not dare ask them where it was, but I looked it up secretly afterwards and found that it was a very prosperous valley region lying south of the Caucasus and that it had a great and ancient civilization. I knew from what these men said to me that they knew what they were talking about, though I did not know anything about their affairs. They knew, above all things else, what America stood for, and they had come to me, figuratively speaking, with outstretched hands and said, "We want the guidance and the help and the advice of America."

As the republic was new, for Western statesmen and media it was not easy to pronounce the name “Azerbaijan”. Hence the misspelling of the republic’s name as “Adjur-Badjan” in Wilson’s public speeches that were published in 1919.

He noted that as a result of this meeting with President Wilson as well as many other meetings and efforts of the Azerbaijani delegation in Paris, in January 1920 the Azerbaijan Democratic Republic was recognized de-facto by the U.S. and other democracies.

“We are all proud that we are celebrating the 100th anniversary of our first Republic as a free and independent nation again that has never been as strong and prosperous as it is today. To eternal freedom and independence, and many many more anniversaries, AZERBAIJAN!”-  N. Aghayev stressed.