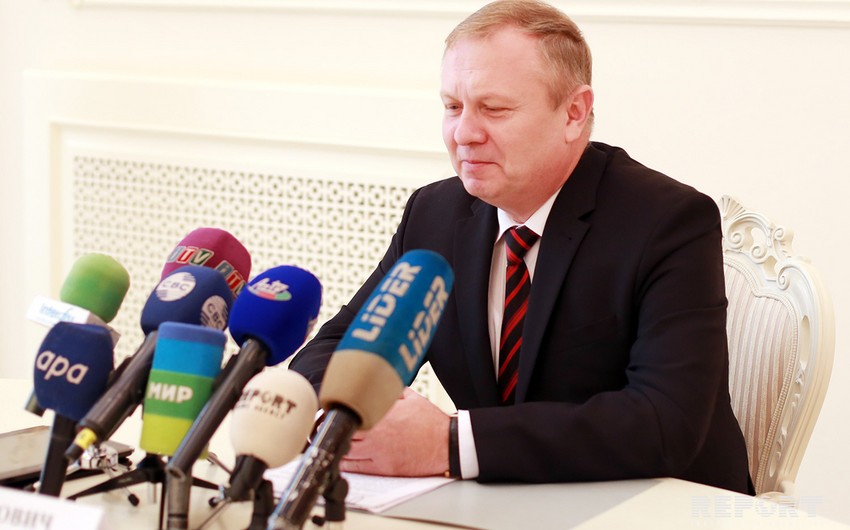 Baku. 28 December. REPORT.AZ/ “2016 wasn’t an easy year for the world, which also affected trade relations between Azerbaijan and Belarus”.

Report informs, Belarus ambassador to Azerbaijan Gennadiy Akhramovich told at the press conference dedicated to summary of the year.

He remarked that heads of states always put the economy in the center of attention: “Our trade turnover reduced to 104 mln USD in first 10 months of this year, which is 50% lower in comparison with previous year. I hope that the final figures for 12 months will show increase of turnover. At the same time, we salute 3.7-fold export boost from Azerbaijan to Belarus. In 2016 the countries completed export and import operations for 300 product nominations, 80 of which are new”.

G.Akhramovich noted economic reforms carried out by Azerbaijan. He told that Belarus salutes measures to diversify the economy, especially those aimed at development of non-oil sectors: “Belarus, which has the same population as Azerbaijan, is capable of feeding about 60 mln people. We try to transfer our experience in agriculture to our Azerbaijani friends”.

The ambassador also noted that both sides are very attentive towards industrial element of bilateral ties. He underlined development and increase of output of Ganja automobile factory: “It produced 8 thousand tractors, 3.5 thousand trailers MAZ. The factory has already supplied its production to Georgia. It carries out works to provide its products to number of other countries. Moreover, it also increases production of Belarussian buses. I hope well-known Belarussian busses will move on the streets of Azerbaijani cities soon”.

The ambassador also highlighted development of cooperation in fields of medicine, high technologies, telecommunication, tourism. He summarized Belarus’s achievements in these fields and told that his country is ready to share its experience in this field.

Talking about military cooperation, G.Akhramovich noted that it is directed not against third countries, but to development of military potential of Belarus and Azerbaijan.