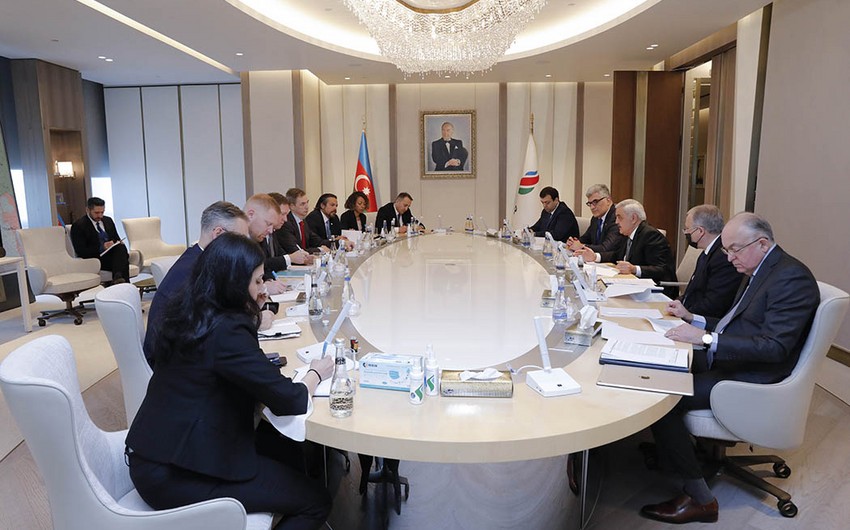 President of the State Oil Company of Azerbaijan (SOCAR) Rovnag Abdullayev has met with a delegation led by Executive Vice President for Exploration and Production International at Norwegian Equinor Al Cook, Report informs.

The meeting discussed the progress of the Karabakh project implemented by the companies on an equal basis, as well as the planning of exploration drilling in the promising structures Dan Ulduzu-Ashrafi-Aypara.

Seismic exploration work in the "Aypara" structure gives a high probability that there are oil and gas reserves of industrial significance here. The sides also exchanged views on other areas of cooperation between the companies, including the Azeri-Chirag-Deepwater Gunashli (ACG) field block, and discussed prospects for cooperation.

Norwegian Equinor (formerly Statoil) and SOCAR are cooperating in Azerbaijan on the development of the Karabakh field and the organization of exploration and production in the promising areas of Ashrafi-Dan Ulduzu-Aypara. The companies also have stakes in the Azeri-Chirag and Deepwater Gunashli (ACG) oil field development project. In May 2018, SOCAR Karabakh and Equinor signed a Risk Service Agreement on the development of the Karabakh oil field in the Azerbaijani sector of the Caspian Sea. Under the agreement, the companies have an equal share.