“Contract of Century”: From 1994 to middle of 21st century Twenty-seven years have passed since the signing of the first major contract to develop the Azeri-Chirag-Guneshli (ACG) block of offshore oil and gas fields in Azerbaijan 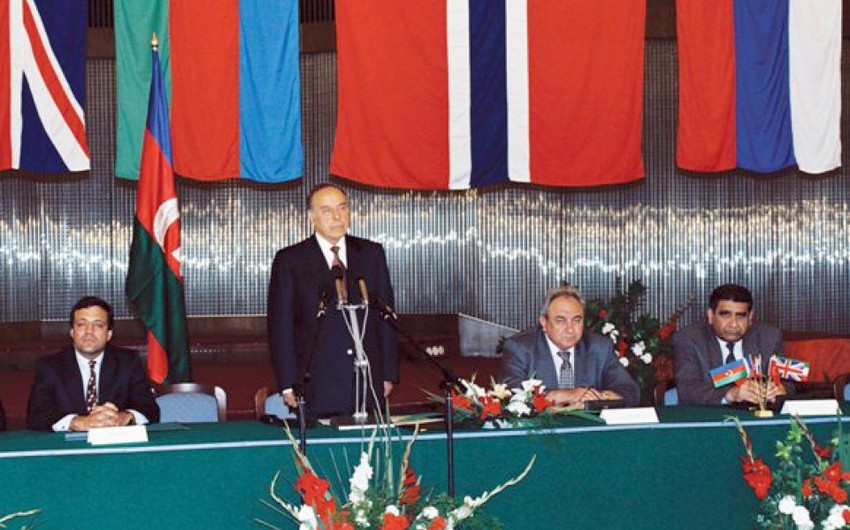 Twenty-seven years have passed since the signing of the first major contract to develop the Azeri-Chirag-Guneshli (ACG) block of offshore oil and gas fields in Azerbaijan, Report informs.

On September 20, 1994, an agreement was signed on the joint development of ACG, and several years later, on the same day, oil workers began to celebrate their professional holiday.

However, probably, it is much more important that the deal will be in force for many years ahead - the updated agreement on ACG, signed by the partners in 2017, when Azerbaijan celebrated the 20th anniversary of this contract, will be in force until the middle of the century.

A consortium of foreign companies led by BP and the State Oil Company of Azerbaijan SOCAR will, by 2050, extract oil and gas from the existing seven platforms (two of them are double) at the ACG fields, conduct exploration there and, if necessary, build additional offshore, underwater and onshore infrastructure or expand the existing one.

ACG has entered its maturity period, which for a hydrocarbon reservoir, means a natural drop in reservoir pressure and, accordingly, production level. To maintain it at a relatively stable level and prevent a sharp decline in oil production from platforms, new wells and sidetracks are drilled from the existing ones to get those zones that were not involved in development.

With the help of the latest technologies, including the injection of water and gas into the earth, the pressure in the productive horizons is maintained. This, in turn, makes it possible to obtain more oil than if such interventions had not been carried out.

From 2023, production at ACG will be supported by a new platform - Azeri Central East (ACE). The partners agreed that further development of ACG requires new investments and in 2019 sanctioned the ACE project worth $6 billion.

When the new platform reaches the assumed plateau, it will account for about one-sixth of the production of the entire license block (within the ACE, production is expected at 100,000 barrels per day).

The future will show whether there is a need to build another platform or create subsea production centers at ACG. Perhaps some more innovative solutions can be introduced there, which are only in the development stage. It is no coincidence that at the signing of an updated contract in September 2017, a figure of $40 billion was announced, which can be invested in ACG in the next three decades.

In the meantime, the project operator, BP, has completed large-scale seismic exploration work in the area, to which, in addition to three seismic ships and robots, an unmanned surface vessel (USV) and a remotely operated underwater mini-vehicle (ROV) were involved.

The collected material will allow a better understanding of the ACG reservoir and maximize production efficiency by optimizing it and choosing the best water injection mode into the reservoir.

As is known, there are natural gas reserves under the ACG oil deposits. Their commercial attractiveness is to be assessed.

The offshore infrastructure for ACG, platforms, technological installations for collection and primary processing, ashore delivery lines can support other offshore projects in the future. For example, the development of the Karabakh field. The possibilities of ACG can also be used to develop the joint Azerbaijani-Turkmen project ‘Dostluq.’

The first contract in the Azerbaijani sector of the Caspian Sea was followed by others. Some were successful, for example, Shah Deniz, for which this year marks the 25th anniversary of the signing of an agreement. This success is growing with the commissioning of new wells and an increase in gas and condensate production from the field. Thanks to this, Azerbaijan has turned into a gas exporter. The created gas transportation infrastructure made it possible to sell this fuel in the region - to Georgia and Turkey - and enter the South European markets.

Some projects were disappointing, which, however, is a common situation when it comes to exploration. However, ACG and the Shah Deniz gas condensate field will remain active until the middle of the century. Their operator BP is conducting exploration and appraisal at several other areas in the Azerbaijani section of the Caspian Sea. According to many analysts, including those from Rystad Energy and Wood Mackenzie, Azerbaijan is a crucial element in BP’s business portfolio, and the company will continue to both develop existing projects and engage in exploration in new areas.