55 % of TANAP construction completed First phase of six billion cubic meters of gas will start flowing at end of June, 2018
1862 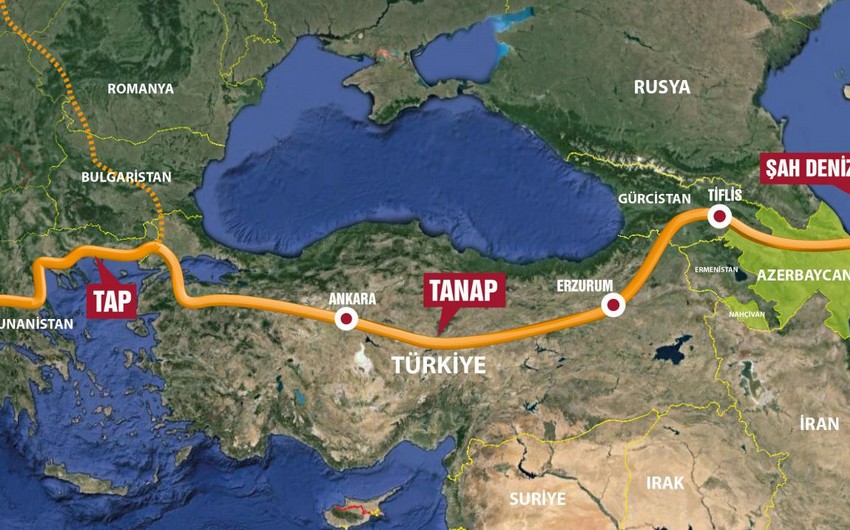 Baku. 12 December. REPORT.AZ/ 55 percent work of Trans-Anatolian Natural Gas Pipeline (TANAP) projectwas completed at the end of this November, way ahead of its scheduled dateline of January 2017.

According to him, the track on the 1,570-kilometer section of the 1,850-kilometer pipeline has been opened and welding operations on a 1,200 kilometer section have been completed. TANAP construction is divided into four different stages and on a sea crossing. Three lots extending from the Georgian border to Eskişehir will include some 56 inches of pipes being used in Eskişehir, where Turkey will receive the gas through the longest and largest pipeline in Europe.

Düzyol also noted the use of Azeri gas in Turkey would increase with TANAP, adding when the project is completed at the end of June 2018 the first phase of six billion cubic meters of gas will start flowing into Turkey.

Düzyol also talked about the gas transfer to Europe, saying 10 billion cubic meters of it will be delivered to nine large buyers in the European market via the Turkish-Greek border as of June 2019.

Notably, TANAP is a pipeline, which will transport the gas, produced within development of second phase of Azerbaijan's 'Shahdeniz' field in the Caspian Sea, to Turkey and then to Europe. TANAP, which is a branch of the Southern Gas Corridor project is being constructed in the territory of Turkey. The pipeline will connect with Trans-Adriatic Pipeline (TAP), designed to transport Azerbaijani gas to Europe through Turkey-Greece border.

On March 17, 2015, groundbreaking ceremony of the TANAP has been held in Kars, Turkey with participation of Azerbaijani, Turkish and Georgian presidents. Initial capacity of the pipeline, which is planned to be put into operation in 2018, will be 16 billion cubic meters per year. About 6 billion cubic meters of this gas will be transported to Turkey, the remaining to Europe. The TANAP pipeline will have two starting point in Eskisehir, Turkey and in Thrace. The sale of gas in Turkey will be carried out by BOTAS company. The total length of the pipeline is 1 850 km. 19 km section of the pipeline will pass through the Sea of Marmara.