Ombudsman issues statement on anniversary of January 20 tragedy The tragedy of January 20, which was committed 31 years ago as a result of the USSR leadership's inhumane and treacherous policy against the Azerbaijani people, is engraved in the memory of our people as the night of Black January. It is also a date that 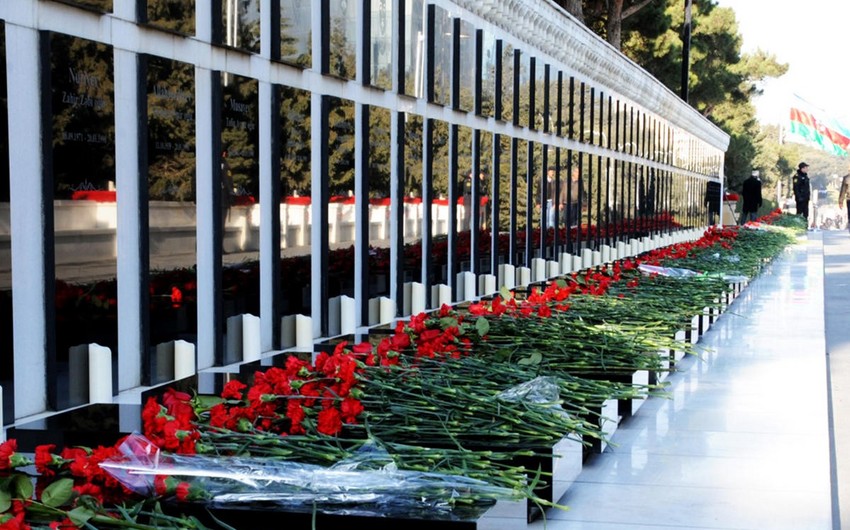 The tragedy of January 20, which was committed 31 years ago as a result of the USSR leadership's inhumane and treacherous policy against the Azerbaijani people, is engraved in the memory of our people as the night of Black January. It is also a date that demonstrates the struggle, inflexibility, and pride of our people, who strive for their freedom and independence.

At that time, the people were protesting against the USSR leadership's discriminatory policy, demanding the investigation of crimes committed against Azerbaijanis in Armenia and separatists in Nagorno Karabakh and the punishment of criminals. The former USSR leadership committed the massacre of January 20 to suppress the people's fair voice and prevent Azerbaijan's independence. The day before the incident, the energy bloc of the Azerbaijan State Television was exploded due to a provocation organized by the USSR Committee of State Security to hide information about the planned event from the population the world community in general.

On the night from 19 to January 20, 1990, the Soviet army was deployed in Baku, Sumgait, and other cities and districts of the country without declaring an emergency and fired on civilians with various weapons. Armed forces killed 150 unarmed civilians mercilessly regardless of their nationality, age, or sex, including children, women, and elderly, 744 peaceful, innocent people were wounded in Baku and surrounding areas, the hundreds went missing, and 841 persons were unlawfully imprisoned. Even the ambulances and physicians carrying the injured persons were opened fire. Therefore medical staff became martyrs or were injured. After the declaration of a state of emergency on January 20, 21 people were killed.

Thus, the international law norms and fundamental human rights were grossly violated, a violent crime against humanity was committed against our multinational people, which stood in defense of freedom of the homeland and its ownership.

On January 21, 1990, a harsh statement related to these bloody events was made by the National leader Heydar Aliyev in the city of Moscow on behalf of the Azerbaijani people, and he demanded a legal assessment of the massacre committed against our people on January 20 and punishment of the perpetrators.

The tragedy of January 20 committed by the Soviet army against our people did not break our people's will, and the struggle for freedom resulted in the restoration of Azerbaijan's independence in 1991.

At the initiative of president Heydar Aliyev, who came to power for the second time in 1993 at the people's request, a special session of the Milli Mejlis was held, and this bloodshed was given its political-legal assessment. The date of January 20 has been declared as the National Day of Mourning in our Republic. Every year on this day, the martyrs are remembered by hundreds of thousands of people with deep respect.

According to the Presidential Decree, citizens of the Republic of Azerbaijan killed during the tragedy were awarded the honorary title "Martyr of the January 20," and state care for persons disabled during the events of January 20, 1990, continues.

Notably, that at that time, as a result of the support of the Soviet Government to Armenia, ethnic cleansing, genocide was committed against Azerbaijan, twenty percent of our lands were occupied, innocent Azerbaijani population was withdrawn by force from Armenia, also from Nagorno-Karabakh, which is an integral part of Azerbaijan, and seven adjacent districts of the country, which resulted in gross violation of fundamental rights of one million civilians. Refusing to resolve the Armenia-Azerbaijan Nagorno-Karabakh conflict peacefully and seeking to occupy new territories, Armenia committed provocations directed at our army's positions in July August 2020, violated the ceasefire in late September 2020, and fired on parts of the Azerbaijani Army and civilian settlements. As a result of this, many military service members and civilians were killed and wounded, and civilian facilities, including residential buildings, were severely damaged. In response, the Azerbaijani Army, under the leadership of Supreme Commander-in-Chief Ilham Aliyev, launched a counter-offensive operation on September 27, 2020, and liberated most of our territories from the occupation in a short period. On November 10, a historic document was signed formalizing the complete defeat of Armenia. With the liberation of our occupied lands and the opportunity for hundreds of thousands of civilians to return to their ancestral lands, their fundamental rights have been restored.

We would like to note with regret that, despite the gross violation of international legal instruments, as a result of the terrible act committed against humanity, one of the most horrible crimes of the XX century for its nature and scale, January 20 events have not been made international legal assessment so far, those ordering and perpetrators of the bloodshed have not been punished.

There are quite sufficient grounds that events that occurred on January 20 can be interpreted as a crime against humanity, which is one of the gravest types of international crimes according to the principles of international law, as well as to hold criminally responsible the military personnel who committed these atrocities and perpetrators who ordered this massacre, then USSR administration, in particular.

We strongly believe that the perpetrators of this bloody crime will soon be brought to justice by giving an international legal assessment of the tragedy of January 20, 1990.

We urge international institutions and the international community, as a whole, to give legal assessment to this criminal act that is associated with severe violations of human rights and is a breach of international legal norms.