Ali Hasanov: Michel Forst’s report doesn’t reflect Azerbaijani realities, it is biased, ordered "This is at least a matter of professionalism"
3095 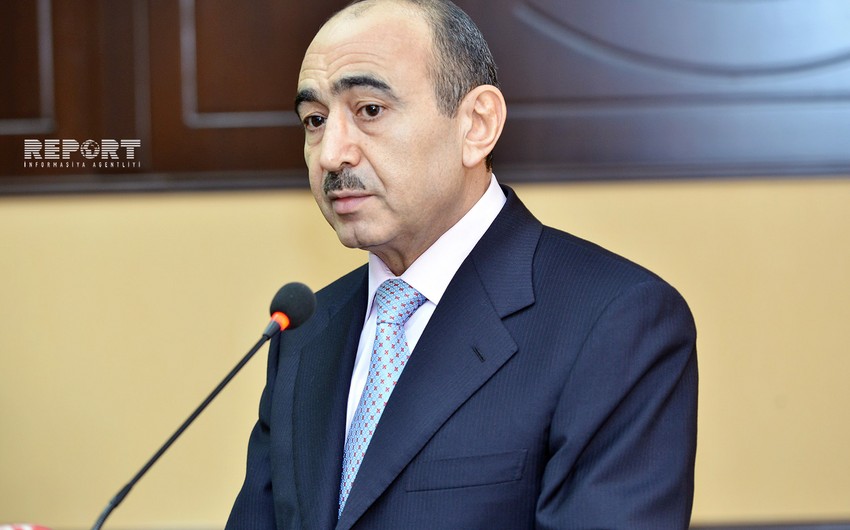 Baku. 23 September. REPORT.AZ/ The Azerbaijani President`s Assistant for Public and Political Affairs Ali Hasanov has refuted a report by Michel Forst, the UN Special Rapporteur on the situation of human rights defenders, on Azerbaijan, describing it as “prejudiced”.

Report informs, In an interview with AZERTAC, A.Hasanov said the report “does not reflect Azerbaijani realities, it is biased, ordered”.

“Azerbaijan maintains active cooperation with various international and foreign NGOs on a continuous basis, and has gained a good experience in this area. Made and spread by these organizations, the reports on Azerbaijan have provoked different response at different times. We have always discussed with those organizations their objective reports that reflected the reality. And if there were some mistakes, real measures were taken in order to eliminate them. However, Azerbaijan has never accepted the documents based on subjective judgement, prejudice and unserious claims. And this remains a principled position today.”

“The reports made by international organizations, especially such a supreme body as the UN should be prepared independently. They should be well-balanced, based on concrete and well-checked facts, and should consider both positive and negative aspects about each point. Unfortunately, Mr Forst’s report is not balanced, the claims, allegations, especially about the arrests, so-called evidence about the media and NGOs were not investigated. The Azerbaijani government’s position was not learnt and taken into account. Some claims previously featured in the “reports” of international anti-Azerbaijani NGOs, like the Freedom House, were included in this document through a copy-and-paste method.”

Ali Hasanov said that when speaking of the human rights, Mr Forst “had to mention the violation of rights of more than one million Azerbaijani IDPs and refugees, and include this into his report”. “However, it is to be regretted that the IDP and refugee problem, which is the most painful problem for our country, was not taken into account. And it`s no coincidence that at the press conference Mr Forst, referring to his mandate, said he won’t mention the Armenia-Azerbaijan Nagorno-Karabakh conflict at all. This clearly attests to his attitude towards Azerbaijan and his pro-Armenian position. But it is not about the authorities within the mandate. It is about the negative impact of the humanitarian situation which emerged in Azerbaijan in the aftermath of the occupation by Armenia. This issue should be in the spotlight of every person engaged in legal issues, especially, an official fulfilling the mission of a UN special rapporteur.”

“As in many other issues, the special rapporteur made a serious mistake by saying that there isn’t a dialogue between the civil society and government in Azerbaijan. And the main reason behind this attitude is that Mr. Forst met with only those NGOs in Azerbaijan that he himself deemed necessary.”

As regard the arrests, the Presidential Assistant continued, Mr Forst’s claims clearly show that he hasn’t even familiarized himself with the nature of those crimes and documents relating to those cases. If he examined them, he wouldn’t have said about those who faced criminal investigation on concrete criminal offenses that they were legally persecuted because of the expression of their views on the Internet. This is at least a matter of professionalism. Moreover, Mr. Forst would not have blamed the government when some NGOs facing financial problems had to cease their activities.” “That is why, the UN’s Special Rapporteur on the situation of human rights defenders, Mr. Michel Forst’s report is far from the reality, it is biased and ordered.”

Ali Hasanov also refuted an initial review of the Venice Commission of a draft referendum on amendments to the country’s Constitution. “On September 20, the Venice Commission of the Council of Europe made public its prejudiced review of the referendum. Usually the Venice Commission does not rush into voicing its opinion about any draft law, and learns the position of the opposite side. But this time all the procedures were violated. Requested by the President of PACE, the Commission reviewed the issue and announced its opinion in just two weeks. Azerbaijan was deprived of its right to voice its view. And Azerbaijan was targeted by the UN’s Special Rapporteur on the situation of human rights defenders immediately after this. Other organizations and the known foreign NGOs network will eventually make similar statements and release reports in a couple of days.”

Ali Hasanov said: “I believe that all this is part of the process that is controlled from a single center. This is an ordered campaign against the Azerbaijani government`s political position on the referendum, and it aims to influence the will of the people. I do not believe that these attempts will yield any result.”

“The Azerbaijani government is defending the interests of its people and bears responsibility towards its citizens. The Azerbaijani government has built its policy based on criteria such as continued progress, social welfare, strengthening statehood and security, and addressing problems within national interests. The people of Azerbaijan fully support President Ilham Aliyev’s policy, and follow their leader. That is why all the attempts to discourage Azerbaijan from its path of development are doomed to failure,” the Presidential Assistant concluded.