​Pascal Contet and Travelling Quartet to perform at Heydar Aliyev Center - VIDEO Anne Gravoin, Mathilde Sternat, David Braccini, and Vincent Pasquier have already won the sympathy of the audience with their performances
687 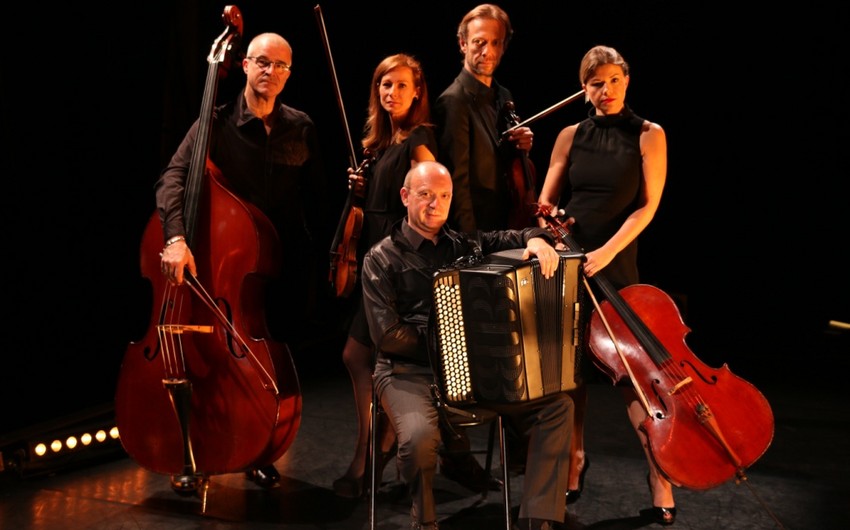 Baku. 12 April. REPORT.AZ/ On May 5, a renowned French accordion player Pascal Contet is to perform at the Heydar Aliyev Center accompanied by the Travelling Quartet group. The concert styled Influences Latines will feature some really popular tango tunes in a brand new arrangement and interpretation, Report informs referring to the Heydar Aliyev Center.

A noteworthy detail is that this repertoire was presented in France, Brazil and Finland so far. To come up with this new program, the musicians worked in close junction with France-based Argentine composers with a view to presenting traditional tango tunes in a new arrangement. This resulted in an interesting blend of traditional music and modern style.

A recognized virtuoso, Pascal Contet has been one of France’s leading figure in developing new genres of modern music for over 20 years. Author of more than 300 pieces, he happened to work with some true celebrities like Luciano Berio, Bernard Cavanna, Joshua Feinberg, Jean Françaix, Bruno Mantovani and Martin Matalon. He is a winner of a number of international awards.

Members of the Travelling Quartet - Anne Gravoin, Mathilde Sternat, David Braccini, and Vincent Pasquier have already won the sympathy of the audience with their performances.

Violinist Anne Gravoin is a laureate of the Conservatoire de Paris. In 1986, she composed Sans Tambour ni Trompette along with Véronique Fiszman. For more than 25 years, Anne Gravoin is actively involved in concerts with leading symphony orchestras and smaller chamber groups.

Cellist Mathilde Sternat was decorated with chamber and cello music first prize by the National Music Conservatoire of Paris. Accompanying some of the world’s leading musicians, M.Sternat is involved in releasing albums, writing musical pieces for theatre productions and arranging for string quartets.

Violinist David Braccini had been travelling the world extensively as a member of the European Union Chamber Orchestra in 1996-2000, as well as performing with a variety of string ensembles. Along with solo performances, he has been also recognized as the Music Director of the Classik Ensemble and the member of the Orchestre de Paris.

Finally, double bass player Vincent Pasquier is another soloist of the Orchestre de Paris, also recognized as a composer. He was awarded double bass first prize by the National Music Conservatoire of Paris. He has played recitals and «Masters Classes» in Finland, The Netherlands, Norway, Spain, Italy, North Korea, the United States and France.