“Identity Beyond the Frame: The Photography of Edward Curtis” exhibition opens in Baku Baku. 17 May. REPORT.AZ/  “Identity Beyond the Frame: The Photography of Edward Curtis” exhibition opens in Baku, Report informs.

An exhibit  organised by U.S. Embassy in Azerbaijanfeaturing 52 pieces of the powerful work of American photographer Edward Curtis being held at the Azerbaijan Carpet Museum. The exhibit is free to all visitors.

Edward Sheriff Curtis (1868-1952) occupies a unique place in American cultural history, as he became the principal storyteller of the Native American peoples and cultures. Motivated by his vocation to document Native American traditions, Curtis left his successful Seattle photography studio behind and dedicated himself completely to his lifelong project. Between 1900-1930, Edward Curtis visited more than 80 tribes and produced tens of thousands of photographs and sound recordings as well as over half a million words of text.The result was Curtis’ 20-volume masterpiece on Native Americans, which is still renowned today as a visual history of an important chapter in American life.

"We are privileged to bring the extraordinary photography of Edward Curtis to Azerbaijan, especially in this 150th anniversary year of his birth. Born in Wisconsin, Curtis was a self-taught photographer who even made his own camera. Between 1900 and 1930, Curtis traveled across the North American continent. He photographed more than 80 Native American tribes, producing tens of thousands of photographs and sound recordings, and over half a million words of text. He poured this work of a lifetime into his 20-volume masterpiece on Native Americans, which is still renowned and treasured today", - US Charge de affaires to Azerbaijan William Gill said during the opening ceremony of the event.

W. Gill reminded that this year we celebrate another important anniversary – the 100th anniversary of the Azerbaijan Democratic Republic: "Both Azerbaijan and the United States know that preserving our history in all of its variety allows us to see and understand where we have come from and where we want to go as a society. As President Woodrow Wilson did 100 years ago, we applaud the ideals that made the Azerbaijan Democratic Republic a progressive leader of its time. So, it is in that spirit, as Azerbaijan pays tribute to that inspiring achievement, we share a piece of our own past with you. The sometimes difficult lessons of that past ultimately show us a way forward to building a stronger, better, more just society". 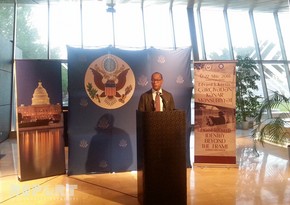 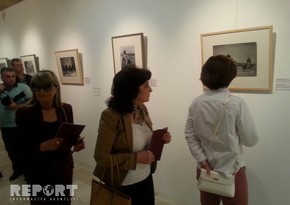