Baku. 11 February. REPORT.AZ / Embassy of India in Baku organized an as part of the year-long celebrations of the 550th Birth Anniversary of Guru Nanak Dev.

Report informs citting to the Embassy, the event was attended by Indian community, including Sikh community, in Baku, students of Azerbaijan University of Languages and others.

The speakers spoke about the life of Guru Nanak, his teachings of love, equality and fraternity and the relevance of his teachings in the present world battered by hatred and terrorism.

Sikh travelers from India to the region over 500 years ago used to stay in the famous Fire Temple (Ateshgah) in Baku.There are inscriptions in 'Gurmukhi' [language of sacred Sikh scripture Guru Granth Sahib] on almost every doorway leading into the pentagonal Atesgah compound, left behind by Hindu and Sikh travellers to the region 500 years ago. 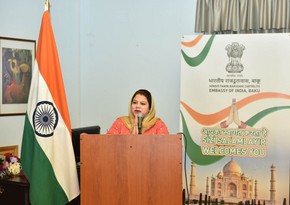 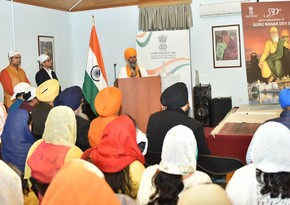