Days of Italian Opera to be held in Azerbaijan

Days of Italian Opera to be held in Azerbaijan Ambassador: We see great interest from Azerbaijan towards Italian culture 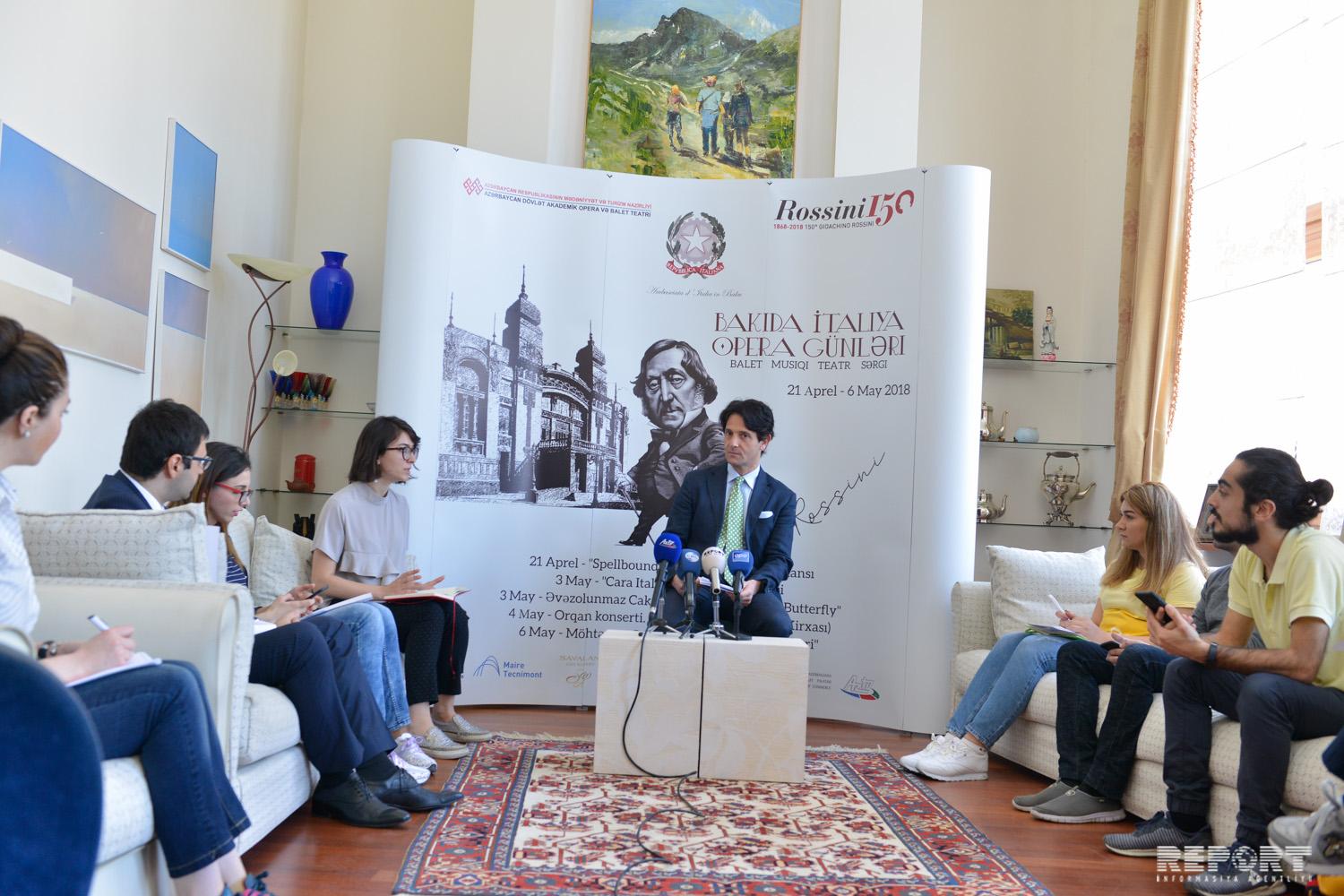 Baku. 1 May. REPORT.AZ/ "We see great interest from Azerbaijan towards Italian culture in connection with this, we organize the Days of Italian Opera in Baku", Italian Ambassador to Azerbaijan Augusto Massari stated this at a press conference, Report informs.

The ambassador noted that the Italian Embassy together with the Ministry of Culture of Azerbaijan organized a number of events.

On May 3, one of the most promising Italian conductors of his generation; Jacopo Sipari di Pescasseroli, will conduct the immortal Puccini masterpiece "Madama Butterfly" alongside soprano SilvanaFroli, who will play the main role of Cio-Cio-San. Official singer of "Festival Puccini" in Torre del Lago, Tuscany, as a soloist Froli took part in various concerts and operas in Italy and abroad.

2018 will also mark the 150th anniversary of the death of Gioachino Rossini.

Just before the beginning of "Madama",  the exhibition "CARA ITALIA, ALFIN TI MIRO"  will be launched in the foyer of the Azerbaijan State Academic Opera and Ballet Theater. The exhibition of the Rome Opera Theater aims to offer the chance to see how Rossini was interpreted and proposed, especially during the last century. To celebrate the 150th anniversary of Rossini's death, the Rome Opera Theater planned an exhibition that will help discover Rossini not only through his music, but also by celebrating his artistic production and vivid passion for life. An unrepeatable opportunity for all opera lovers, who will be able to admire unique iconographic artifacts, including sketches by Giorgio de Chirico and historical stage costumes. The exhibition will be open to the public from 3 to 23 May 2018.

The next day, on May 4, Italian organist Maurizio Salerno will perform an organ concert in the wonderful Church of the Saviour. In his career Salerno, artistic director of the orchestra "I PomeriggiMusicali", has carried out an intense concert activity in Italy and Europe, and performed in the United States, South America, Russia and Australia.

The Italian Embassy in Baku will also celebrate Rossini career with a performance of the "Barber of Seville" on May 6.

Young and talented conductor Alessandro Calcagnile and baritone Daniele Caputo will bring you the vivacity of "The Barber", probably the most beloved opera buffa of all time. Figaro will be interpreted by Caputo, one of the main Italian baritones for this role, who is constantly involved in all the major Rossini productions across the country.