Azerbaijani-Qatari commission meeting call for expansion of all-out relations The third meeting of the Joint Economic, Trade and Technical Commission between Azerbaijan and Qatar was held at the Emergencies Ministry today. 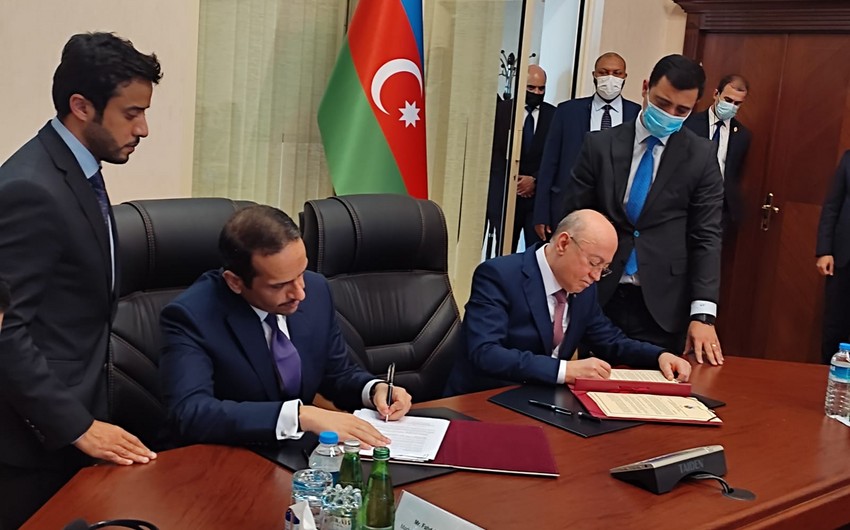 The third meeting of the Joint Economic, Trade and Technical Commission between Azerbaijan and Qatar was held at the Ministry of Emergency Situations today.

Report informs that the meeting was attended by the co-chairs of the Commission - Azerbaijani Emergencies Minister Kamaladdin Heydarov, and Deputy Prime Minister, Minister of Foreign Affairs, and Co-Chair of the Qatar-Azerbaijan Intergovernmental Commission Mohammed bin Abdulrahman Al Thani.

Kamaladdin Heydarov noted that the meeting coincided with a significant day for Azerbaijan - the Day of Restoration of Independence and that for the first time, this holiday is celebrated by the victorious nation, who have restored own territorial integrity. The minister said that the high-level diplomatic relations between Azerbaijan and Qatar were established in 1994 and the two countries have constantly supported each other in resolving important issues, as well as successfully cooperate within international organizations in their own interests.

Underscoring that the political will and wise foresightedness of the Azerbaijani and Qatari leaders are the basis of high-level cooperation in various sectors, the minister underlined that the commission, established by a joint decision of President Ilham Aliyev and Emir of the State of Qatar, His Highness Sheikh Tamim bin Hamad Al Thani, proved to be dynamic in developing many areas of the bilateral relations.

Speaking about the work done since the establishment of the commission, the minister expressed confidence that mutual efforts will continue to further expand multifaceted relations between the two countries. He also noted that as a result of the 44-day Patriotic War, under the wise leadership of Ilham Aliyev, Azerbaijan’s heroic army liberated lands occupied by Armenia for about 30 years. The minister invited Qatari businessmen, business circles, and investors to invest in the liberated areas, which are currently undergoing rapid landscaping and construction work.

In addition, informing about the Alat Free Economic Zone, founded by President Ilham Aliyev on July 1 this year, Minister Heydarov expressed confidence that Qatari business circles and Qatari investors, especially in the industrial sector, will be interested in participating in projects implemented there.

Sheikh Mohammed bin Abdulrahman Al Thani thanked him for the cordial meeting and congratulated him on the occasion of the Day of Restoration of Independence. He noted the importance of the work done by the Joint Commission, noting that there are good opportunities for further expansion of bilateral relations, including in economic, trade, investment, and tourism sectors, and the need to continue efforts to take advantage of these opportunities on a mutually beneficial basis. He expressed confidence that the commission will continue to be successfully fulfilled in terms of further expanding multifaceted relations between our countries, based on the wise decisions and the political will of the leaders of the two countries.

The sides exchanged views on other issues of mutual interest, listened to the views and proposals of the Commission members, and held discussions.

A protocol was signed at the end of the meeting. The document was signed by the co-chairs of the commission.