Nikol Pashinyan's playing with bear - manifestation of unsecured interests - COMMENT Baku. 21 September. REPORT.AZ/ Nikol Pashinyan, who occupied the prime minister seat in Armenia as a result of the state coup, is brutally violating the norms and principles of international law, just like his forerunners. This is an indication of the invader, terrorist and usurpatory nature of Armenian politicians.
1667 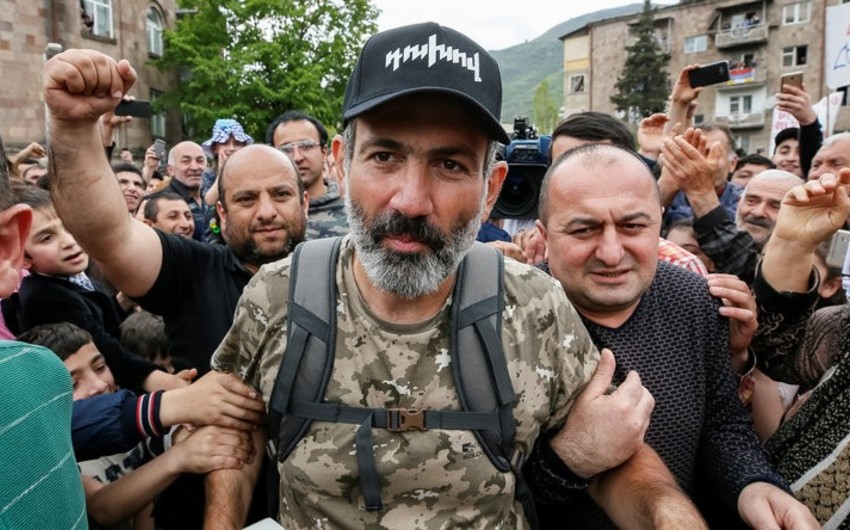 Baku. 21 September. REPORT.AZ/ Nikol Pashinyan, who occupied the prime minister seat in Armenia as a result of the state coup, is brutally violating the norms and principles of international law, just like his forerunners. This is an indication of the invader, terrorist and usurpatory nature of Armenian politicians.

On September 18, Nikol Pashiyan arrived in the occupied Kalbajar region of Azerbaijan. He played with bears there and took their photos. It is not a secret that the scene was pre-made. The stage was set up so that the bears would sit down on the road and wait for Pashinyan to come and take their photos.

Of course, our goal is not to write about the Nikol – bear love. We would rather evaluate some of the points dominating in this country and abroad after the state coup in Armenia. Nikol Pashinyan is exaggerating the combat capability of the Armenian army in awareness of the seriousness of situation there. However, soldiers in that country are even short of underwear. There is no point talking about the military power of the army with torn boots. It was his second visit to the occupied lands during his term in power and he tried to show moral support to the representatives of the occupational forces.

With his actions Nikol Pashinyan also turned his wife Anna Akopyan’s appeal upside down. During her visit to Moscow, Akopyan came out with the "Women for Peace" initiative. She gathered a group of mothers of Armenian soldiers killed in Karabakh battles on September 15 at the Prime Minister's residence and urged them to address the Azerbaijani mothers. Nikol Pashinyan's wife called on Azerbaijani women to join her peace initiative.

Unfortunately, the statements and actions of pashinyans and akopyans contradict each other. By stepping on Azerbaijani soil, Nikol confirms being invaders, while his wife is engaged in pulling the wool over the eyes of the international community. They try to introduce themselves as peacekeepers to the world. But obvious truth cannot be hidden. Pashinyans and Akopyans all grew up in Armenian families propagating hostility against Turks. They were taught that Armenians are a poor ethnic group. Those who are brought up in hatred for humanity cannot love neighbors or people . Because they have huge psychological complexes. They are always living in fear.

The same fear makes them suspect everyone. With the same caution they treat Russia that established a state for Armenians and has shown paternal care for them for already 200 years. History proves that the representatives of this ethnic group have always betrayed their great patrons. Their rebelliousness against the Ottoman Empire and Pahlavi in Iran in the last hundred years is yet another proof of it. They opposed Bashar al-Assad when Syria events started. Then something happened and they had to change their position. By the way, Armenia's current government sent troops to Syria by Russia’s instructions.100 Armenian soldiers will serve in Syria together with Russian servicemen. Thus, the new government in Armenia is obliged to adhere to Moscow’s position on Syrian issue.

The behavior of Nikol Pashinyan, who led the power revolution in Armenia with the help of his foreign patrons, Armenian diaspora and lobby, in relation to Russia is also characterized by his ethnic belonging.

Why did he play with the brown bear cub but not with other animals in Kalbajar? After all, there are mountain goats, roe deer, wild boars, stony squirrels, snakes, bearded vultures, eagles and other wild animals in this area. For example, he could have photographed the roe deer for the sake of a peaceful call from Anna Akopyan.

Another issue we want to talk about is related to the elections in Armenia. According to Zhoghovurd newspaper released in the country, due to postponement of early elections to the parliament Pashinyan's "government of consent" is on the verge of collapse: "While approving the government program in May, the extraordinary elections were agreed upon. But it is not ruled out that elections will not be held at all. That is why this issue put Pashinyan before the fact. The author of the article underlined that the situation was severe and could even lead to ‘change of power’. The article notes that Pashinyan may lose most of his supporters as a result.

Notably, early parliamentary elections in Armenia were planned to be held in autumn. Pashinyan said that this political campaign will be held in late May-June, in the first ten days of June. He also proposed reformation of the current constitution. This caused dissatisfaction among the coalition forces.

It shows that the supporters of Pashinyan’s bloc are not ready for parliamentary elections.

The supporters of former President Robert Kocharyan started to attack the participants of May riots. Kocharyan threatens Pashinyan, blames opposition for the March 2008 massacre and points to glassy Putin-Pashinyan love. It further aggravates the political climate in the country.

The elections to the Council of Elders of Yerevan will be held in such conditions on September 23. The organization will elect the city mayor. The facts of bribing voters emerged during the election campaign. The incident was recorded in the Arabkir, Kanaker-Zeytun Districts of the city with prosecutor's office investigating the case.

Therefore, it is naive to expect that events in Armenia will ease soon. Because the new government has not taken any steps to ensure either domestic or foreign interests. In other words, playing with a bear cub in occupied Kalbajar does not solve anything.