Historical mistake of Pope - COMMENT The Pope broke his promise 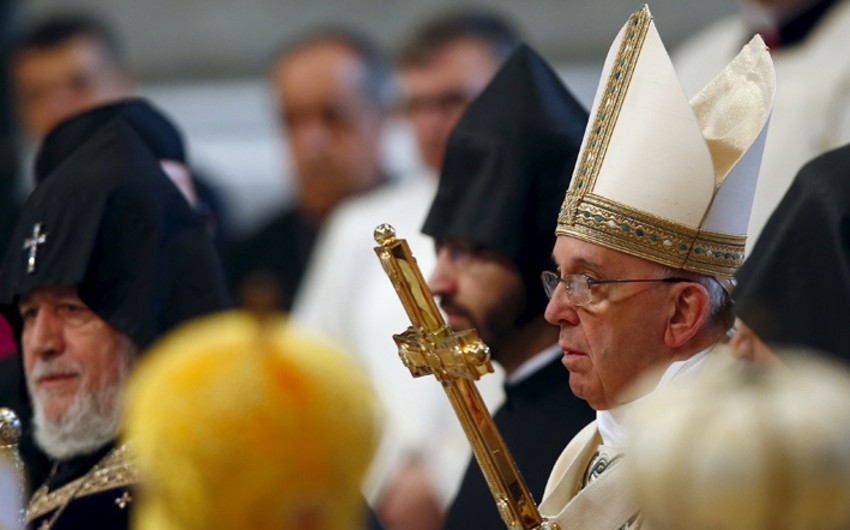 Baku. 13 April. REPORT.AZ/ A day before Pope Francis I expressed pro-Armenian attitude to the events in the Ottoman Empire in 1915, which undoubtedly caused surprise anyone who understands the world politics and history, including understands the essence of religion and reconciliation.

The Pope said that, "In the last century there were three events of genocide". He argues that "in the XX century "the first genocide suffered the Armenians of the Ottoman Empire." The second genocide committed by the Nazis against the Jews, the third genocide of the former Soviet Union, which Joseph Stalin carried out against Soviet citizens.

Taking the reconciliation and love in the world, as well as a tribute to the Christians, following the precepts of Jesus Christ, and to members having 15 century history of Catholic doctrine, he may not raise this question. However, in the situation that now exists in the world, and in an atmosphere of tension civilizations, we can't express our attitude to the statement of Francis I.

It's not a secret that, the Vatican has its place in world politics. This state is a place of pilgrimage for more than a billion people around the world, and its leader is their mentor.

However, this statement of Francis may create problems in relations between the Vatican and Muslims, including the Turkic world, which began to build or have already been built thanks to the previous popes.

Similarly, with this statement the current Pope made the following mistakes:

-Gave rise to those, who argue that in the world there is a Christian-Muslim confrontation;

-To distort the historical reality;

-Show that, the Vatican is not neutral in the conflict resolution, and reduce the likelihood of mediation;

-Reduce the trust of Muslims and Turkic world to the Catholic Church;

-To express their attitude to the event, which was not without taking into account the interests of Christians, including representatives of the Catholic currents;

-Talking about God and justice and love, to which Jesus Christ called, succumbed to the lies of the Armenian lobby and their patrons;

-As well couldn't curb their greed in world affairs.

What are the reasons, forced Francis to take such step? Sure, even the most powerful members of the clergy may go the way of the truth. Because they are people too. The deification of the people is a sin in any religion. In this regard, the Pope also can make mistakes. However, for any human being is not just a mistake, but a great sin to argue about the event, which was not, and the witness, which he was not.

Unfortunately, the Pope continues to commit the mistake of not revealing the true nature of such events as genocide of Azerbaijanis in Khojaly, or Muslims in the former Yugoslavia. These events occurred not 100, but 23 years ago, and today, when the Pope was a witness of them.

Therefore, in the speech of the Vatican leader have also other factors. We have several assumptions as below:

-In the Christian world there is a sharp divergence in relation to the Muslim world;

-Due to the reduction in the number of people who believe in the Catholic Church, the Pope, protecting these inventions, trying to regain the Christians;

-The Vatican is trying to show itself a great follower of the Church of Jesus over other religions;

-Supporting false and has no legal basis for the claim to cook for themselves allies in the Caucasus;

-Vent anger at the defeat of the Ottoman Empire at the Battle of Çanakkale and others.

Thus, Pope Francis didn't keep his promises given before the elections. He argued that he wouldn't be engaged in politics and spiritual matters. However, the head of the Vatican broke his promise.