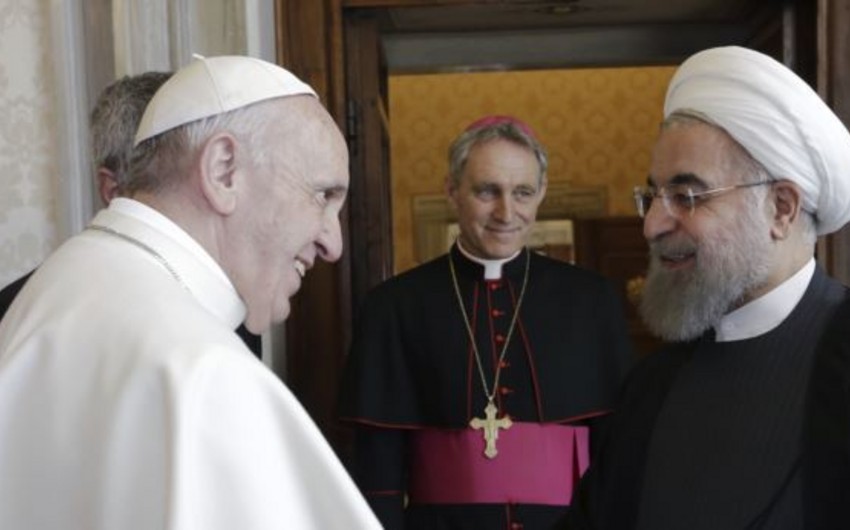 Baku. 30 January. REPORT.AZ/ Iran is the most resource-rich country of the Middle East.

Along with oil, natural gas, caviar, the country has such tourist areas as Savalan, Garadagh and Isfahan. Therefore, lifting of sanctions against Iran has increased the possibility of opening a new market in the Middle East.

After the Islamic Revolution happened in Iran in 1979, the reformist President Mohammad Khatami opened the doors for Europe for the first time.

For a number of advantages, the visit of the current President Hassan Rouhani in Italy and France, recalls his visit to the continent. Since Rouhani, like Khatami, considered to be representative of the reformist wing.

However, considering the fact that the current president is willing to present new Iran, the European approach to the representative of the Islamic Republic is a little bit different.

Hassan Rouhani was in Europe for 4 days and ended his visit today.

During the visit of Iranian President to Italy and France, along with officials of the country, he was also accompanied by businessmen. This fact reve

als the real goal of the visit. In other words, Tehran has not only promoted itself in Europe, but also provided an enticing promises, trying to regain trust lost during the last 37 years.

During his visit to Italy Hassan Rouhani contracted by an average of 17 bln. Dollars.

In France,Iran and Airbus signed an agreement for 22 billion Euros for purchasing of more than 100 units of aircraft.

Ruhani also arrived to Europe not with empty hands. At the time when the oil is getting cheaper, Tehran announced its readiness to make the European states a discount of 6.55 USD for each barrel of the 'black gold'.

According to the information currently Saudi Arabia is selling oil to European countries at a discount of 4.85 USD. In addition, Iran has promised to begin natural gas supplies to Europe in two years.

However, for the implementation of all this, along with other areas, oil and gas industry of the Islamic Republic needs a large-scale foreign investment. Some time ago, US Secretary of State John Kerry said that Iran needs foreign investments worth 500 billion USD.

Some time ago, Hassan Rouhani stated that they had a potential of 50-60 billion USD for investments in the economy.

In other words, the Iranian economy, which faced many problems due to its isolation for 37 years, is waiting for foreign investment. The main purpose of Hassan Rouhani's visit is to invite European investors to Iran and develop contacts with them.

According to him, the issue of reducing tensions between the two countries does not depend on Tehran and Washington. Iranian President said that after the lifting of sanctions they will be able to purchase the US civil aircraft, while they may sell carpets, pistachios and other local products to the USA.

The visit of head of the Islamic Republic was of great interest to his country, not only economically, but with the social, political and cultural perspectives.

Europeans behave as if have been set for resumption of relations with Iran for a long time.

Khatemi was met in France very warmly. However, the dinner in honor of the guest was cancelled due to inclusion of wine on the menu.

Despite Tehran's insisting, French side did not satisfy the request of the Iranian guests, saying that this matter was identified in the protocol.

However, during the visit of Hassan Rouhani, Europeans were trying to please the Iranian side.

The issue of covering Italian statues in the museum of history caused a lot of 'noise'. Clarifying the question, Hassan Rouhani said that the Iranian side had not asked to cover the statues in the Italian museums: "However, we are grateful for such a sensitive attitude. I know about the hospitality of the Italians. Thank to those who have done everything possible to make guests feel comfortable ".

On January 31, in Iran system for Worldwide Interbank Financial Telecommunications (SWIFT) will run its operation. Three years ago, the system suspended its work in Iran and working in the 30 Iranian banks was banned.

Europe, which criticized wearing of headscarves 'hijab' in Iran and linking it to the issue of human rights, now put a 'hijab' on their statues themselves.

Hassan Rouhani faced with protesting representatives of People's Mujahideen Organization, the HQs of which is located in Paris.

In 2002 the European Union reached an agreement to start negotiations with the Islamic Republic.

Then the United States and Israel condemned the behavior of Europeans, claiming violations of human rights and Iran's nuclear program implementation.

Therefore, it is not excluded that while cooperation with Iran these two issues will not be forgotten.

Of course, the attitude of Europeans to understand Hassan Rouhani (covering the statues in Italy, excluding wine from the dinner menu) to a greater extent was an attempt to enter the Iranian market.

This is in some degree an attempt to bring an apology to Iran in connection with the period of sanctions.

In all cases, Europe is trying to appeal to Iran, at least by covering statues. Therefore, the parties are quite possible, and other concessions. All this will come up even more after investing funds in Iran and expanding cooperation in this field.

In the meantime, only attempts of cooperation in investment, oil and gas sectors, and security in the region are noticeable, as well as covered statues ...